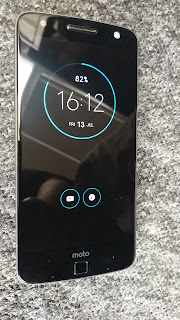 Phone reviewers don't often get to experience the real world use pattern that most folk do, their typical exposure to devices being 2 weeks rather than 2 years! So this one's quite rare for me. I bought the Moto Z on release in September 2016, nearly 2 years ago, and I thought that given the above, and the fact that Android Oreo just dropped in, it would be a good point to look back at that period and see how it performs now, compared to more modern phones. This was the first of three generations of Z phones by Motorola/Lenovo which they committed to the system of Moto Mods.

Reflection
The Moto Z has, to some degree, been on the back-burner for a lot of this time, especially after the release of the Moto Z2 Play which seemed to be a better all-round Moto Z model. On reflection, I'm not so sure about that, though it certainly does have a couple of key advantages like a bigger battery and 3.5mm audio-out socket. But also a downside or two, like the lower resolution screen and lower chipset.

Still Flying
In the company of devices like the Samsung Galaxy S7, HTC 10, LG V20 and G5, the Moto Z had a cutting edge Snapdragon 820 with 4GB RAM which enabled the device to fly. It still does. It was also the first modern smartphone widely released to market with no 3.5mm audio-out socket and USB-C instead (regardless of claims elsewhere) which I really haven't found to be a limitation, but do accept that opinion remains divided. The 4GB RAM proves how forward thinking Moto were with this. We're still seeing Android phones without AndroidOne or Go coming with 3GB, and in some cases 2!

Thin and Light
It has a super bright 5.5" AMOLED 1440p 16:9 screen protected with Gorilla Glass 4 which still only gets used here indoors set to 10% and remains more than adequate. Colours are punchy, blacks are deep. The vibrant setting makes that even more so. It's obviously the same size as all the Z-Series phones so that the Mods fit, but it is super-thin at 5.2mm which, at the time, was a big WOW for many and remains the thinnest/lightest of any Z-Series handset. I maintain that modern 2:1 screens are a gimmick, as are Notches and bezel-free design with nowhere left to put your fingers.

Pragmatic
The Z was made of glass and aluminium, wafer-thin and classy in the hand, buttons metalic, solid and firm to the press. USB-C was pretty new at the time, too. This really was a very forward-looking device. There was apparently a 64GB version out there somewhere, but I never saw one in the UK. This one is 32GB which irks in 2018, but pragmatically and laying aside any paranoia, armed with a big microSD Card for everything that could go onto it, I really didn't have a problem.

Dreaming
It was also one of the first devices which supported Daydream and Google's vision for VR Headsets. The higher resolution screen ensured that the experience was as good as it could be and although I no longer have a headset I did try that out at the time. It wasn't great - and I think that it still isn't to be honest - but other firms are making headway with it, like Samsung. Point is though, that few handsets are ahead with this much further and Moto had this out there two years ago alongside Nexus.

Mellow
Hard to think that less than two years ago a device was sold with Android 6 on it! How expectations change! Nougat 7 came along almost exactly a year ago, in July 2017 and we've had to wait for a full further 12 months for Oreo to drop, unless, it seems, we lived in Brazil where Lenovorola seem to execute testing and push updates out first. That promise of updates seems like an awful long time ago now and whilst others leap-frogged Moto to updating various devices to Oreo, they just didn't really seemed bothered and were determined to take their own sweet time! To be fair, the others didn't have to ensure capability with a range of Mods, but I'll come to that.

TurboPower
The battery, on the face of it, was pitched at 2600mAh in order to pay thinness off against power, with the trick up their sleeve of course, of more juice via Mods (which they could flog!). The battery size always made me uncomfortable but to be honest, I can't remember a day when I didn't have a Mod battery snapped on anyway. It felt like the 'thin' thing was for posing. For fashion. For pushing boundaries. Yes, if you limit your use of it through the day you'll get to evening no problem - and many people no doubt did - but with even the 2220mAh Mod in place, which really doesn't add much thickness, you're suddenly well ahead of the trailing pack with nearly 5000mAh in your pocket. There was a TurboPower plug and cable in the box which gives 8 hours of power in 15 minutes of charging.

Rounded
The Moto speaker arrangement here is one! Firing sound out of the earpiece also used for calls. Over the years, since the forward-firing stereo speakers of some Moto devices (X, G) were taken away, they have reverted to this earpiece thing and actually, I think it works pretty well. Up against other devices with a single (often bottom-firing) speaker it frequently sounds better. It sounds rounded and good quality, if not the loudest. But I'd much rather have that quality than to compromise with a tinny payoff and volume. But then we have the Mods - what a payoff that is! Armed with a JBL stereo speaker, you're suddenly party-ready.

DAC
Going back to the headphone output via USB-C for a moment, Motorola had included, built into the handset itself, 24bit DAC which means that high quality audio output can be achieved through the supplied earphones, USB-C enabled headphones or via the supplied dongle out to 3.5mm. The sound through my headphones is fabulous! Again, ahead of the pack and times as this feature becomes more common.

Squircle
The fingerprint scanner is on the front, down at the bottom under the screen (where there's ample space to put your fingers and thumbs!) and it's a near-squircle! By today's standards it's small - even Moto themselves re-thought this for all models going forward and introduced the 'pill' shaped bigger scanner (which also doubled as a swipe-navigation control freeing up screen space). The small square scanner is perfectly good and works really well still. When compared with some of the side-mounted (particularly Sony) scanners, it's not that much smaller. But the proof of the pudding is in the eating, and it works perfectly well. The registration is lightning fast as is execution every time. Of course, the near-unique Moto trick here also is that a single-press on that scanner also turns off the screen. Fiendish. I still don't know why this wasn't adopted (nor the Moto Approach for quick wave-over Glance information).

Snap
The main camera is a 13MP f1.8 unit with laser AF and OIS, so no slouch, and a 5MP f2.2 front-shooter. 4K video recording is available, again, with OIS integrated. The camera is simple by today's standards. No fancy bokeh modes or secondary zoom/wide lens. But it's perfectly good for people to take perfectly good photos. The lens is good and fast and it does much better than many in low light. Who needs fancy modes anyway! An image is collected via a hole which stays open for a length of time!

Overarching all the aforementioned, is the ongoing access the device has to the Moto Mod system. A system that still seems to be expanding. Not at a hugely fast rate, but steady. There have been some Mods which were talked about but never seen, some which were out from Day 1, many in between. What's nice about this is that the phone is 2 years old and they've stuck to the plan. They all fit and work, camera, projector, game-pad, batteries, printers, keyboard (still coming apparently!), stereo speakers, Alexa speakers, vehicle docks, wireless charging backs, style backs and probably some I missed! It's a great fun modular system and can hugely enhance a person's use of the phone. But I've covered that aplenty over the months.

Stand or Sit
The question is, does it stand up to being used as a daily phone after 2 years - and the answer is a resounding yes! There's no reason at all why this can't be used ongoingly. The Oreo update has brought some of those features which we're seeing in many devices these days with the latest version of Android. P-I-P, split-screen, emoji, app security scanning, notification and settings revamp, Auto-Fill, etc. But this is more about the user feeling not forgotten and up to date. Moto has now brought this along for their faithful followers and investors in the Mod system. We don't really need 18:9 screens and handsets that are too tall for their own good. We don't need fancy camera modes. We don't need Notches. We don't need zero bezel. I'm pleased to still have the Moto Z in stock and will continue to enjoy using the ground-breaking phone.
at July 13, 2018