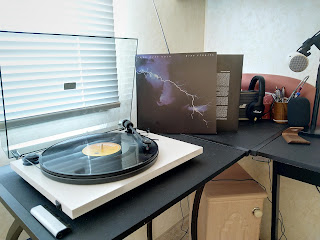 Dire Straits' music doesn't seem to date, somehow, like other stuff can. This is as enjoyable now as it was first time round! This is a 180g LP bought relatively recently on the cheap from AmazonUK. Private Investigations is addictive and along with Telegraph Road engulfing Side 1, there's almost no need to turn it over ;-)

Wiki
Love over Gold is the fourth studio album by the British rock band Dire Straits released on 20th September 1982. The album produced two singles, "Private Investigations", which reached number 2 on the UK Singles Chart, and "Industrial Disease", which reached number 9 on Billboard's Hot Mainstream Rock Tracks chart in the United States. The fourteen-minute opus, "Telegraph Road" has gone on to become a favourite on FM radio worldwide. The album reached number 1 on album charts in Australia, Austria, Italy, New Zealand, Norway and the United Kingdom, and number 19 in the United States. Love over Gold was later certified gold in the United States, platinum in France and Germany and double-platinum in Canada and the United Kingdom.
at July 10, 2018