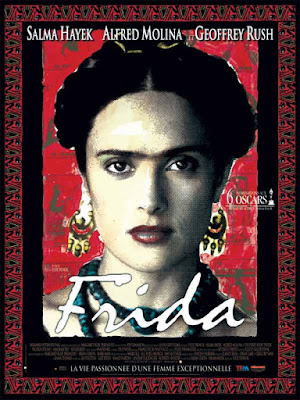 Largely ignorant in the ways of the art world, I have to admit to having never heard of Frida Kahlo, nor Diego Rivera! But then that’s a good reason to learn about them, I guess.
So, the basic true story is centred around Frida Kahlo, disabled from a young age (though no mention of polio appears in the film) and whose body was further damaged by a bus crash. But she was a sprightly young Mexican and when she realised that she was not going to physically make it as a doctor (again, missed out of the film) she opted for art.
The 2002 film, following a book by Hayden Herrera, depicts Frida’s dogged determination to make something of herself and if art is what is going to allow her to make her mark, then art it was. She pursued the attention of Mexico’s most famous artist, Diego Rivera in order to find out from him if she had the talent as an artist to make it big. This path then threw them together and they married and both produced much art.
The film is largely about the two of them. Womanising, free spirited but politically driven artist Rivera, played by Alfred Molina (Chocolat, The Da Vinci Code, Boogie Nights) and madly in love with him Frida, played by Salma Hayek (Desperado, Once Upon a Time in Mexico, From Dusk Till Dawn) against a backdrop of post-revolutionary Mexico and the Communist Party, between 1930 and 1950.
The two leads play their parts quite superbly, especially Hayek. They are both convincing and bring a clarity to the screen surrounding the difficult times, dilemma between conflicts involving love and open relationships, art and politics, principles, values and family responsibilities.
It’s a sad love story really in amongst all that, where the disability in many ways seems to prevent the onward path which the viewer feels Frida should be embracing. Having said that, she does pretty well for herself in many ways, dipping her toe into all sorts of different experiences including some sex scenes which are handled sympathetically by director Julie Taymor. The sets are purposely colourful, reflecting the saturated outlook of artists in a culture-rich country.
The supporting cast include a few of the well known Mexican actors but also others in a generally excellent line-up. Antonio Banderas (Desperado, You Will Meet a Tall Dark Stranger, Once Upon a Time in Mexico), Edward Norton (Fight Club, Red Dragon, The Illusionist), Saffron Burrows (Troy, Enigma, Circle of Friends), Ashley Judd (Kiss the Girls, Double Jeopardy, Olympus Has Fallen) and Geoffrey Rush (The King’s Speech, Quills, Pirates of the Caribbean) to name a few. Rush is almost unrecognisable as Leon Trotsky, with whom Frida has a brief fling.
The whole cast did an excellent and convincing job bringing this story and its characters to the screen and I certainly have learnt a bunch of history which I didn’t know anything about. It’s an engaging film which is well worth a look one cold Saturday afternoon, though probably not so good for younger eyes in places!