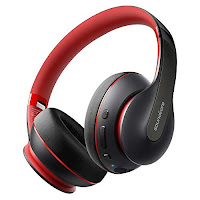 SoundCore, the offshoot brand/firm from Anker are making some great stuff these days. I previously reported positively on the Motion+ Speaker and now I was looking for a simple pair of headphones having got myself into a real pickle with aptX this, Low Latency that and noise-cancelling the other! These fit the bill - as long as you like bass!

The Soundcore Life Q10 headphones are very cheerful and bright being black with a smart red trim throughout. They are obviously over-ear as headphones and have a firm and clicky expanding headband with good travel. I have a huge head and it's very comfortable for me. I also have huge ears and mine just fit nicely into the cushions (but with not much to spare, unlike my AKG K701 mega-size unit in which they're lost)! I have used them for extended plays now watching films and they remain comfortable into hours. They fold up - in on themselves. Kind of. There's a limit to how foldable larger headphones can get I suppose.

Comfortable into hours is also a good thing because you won't often have to charge these 'phones. The Anker battery technology is clearly cross-pollinating here as this set has a staggering 60 hours of use time, far in excess of most others and certainly rubbish buds! I'm guessing that we're not going to get 60 hours on Bluetooth on full volume, but certainly on sensible volume levels and using the supplied 3.5mm cable to plug into your source, you're much more likely to do better and somewhere near what they claim. Testing to come. There is a payoff here too which makes them quite big - they certainly do stick out significantly more from the head than many others. Depends how much the extra battery is worth to the user as to whether this payoff is worth it.

Talking of charging, I was delighted to find this set which actually employed USB-C over microUSB. There's a huge number of headphones out there, bang up to date, all-singing-all-dancing, which are still using the old standard, so choice is certainly much slimmer for those of us who barely have a need for microUSB any longer. Here we go then, and in my test, I set up a phone on a Qi charger and started a music player rolling a random track loop, hooked it up to the 100% charged headphones by bluetooth and set them to medium volume. It was very hard to kill the battery as the level ticked over to 90% after 12 hours and then 80% after 24. On that basis, we're looking at 24hrs x 5 = 120hrs! Now, I'm sure physics will come into play if I were to just leave them running and every 20% portion of the battery would not behave so well, but even so - this is a staggering performance and leaves no doubt as the the 60 hours claim. I would expect even more if wired. Compare this to the dreadful 4-8hrs of the average earbuds and there's no competition if you're OK with size.

Fast USB-C Charging means that you can, with the right gear, get 5 hours of use for only 5 minutes of charging or a full charge from flat in 2 hours. I tested this too and it's as good as they say - how could I now doubt them! If you want to take advantage of all that fast stuff you'll need to grab your own fast-charger as there's not one supplied. One quirk that I wasn't expecting and hadn't really thought about was that it seems you can't charge the set when being used with bluetooth, but you can when being used with a cable. Seems a bit odd.

The headphones are made of plastics and faux leather for the cup-cushions but it feels sturdy enough, solid and hard. They don't look 'cheap' cheap, but certainly not premium. There's no IP-rating here either, so not good for Singing In The Rain! On the right cup there's the USB-C and 3.5mm audio-in port. There's a red LED to indicate when it's charging which turns blue when done. There's an 18" long USB-C to USB-A cable supplied in the box as well as a 3ft 3.5mm to 3.5mm cord. There's a BassUP button (which I'll come to) alongside volume up/down buttons and a multi-function Power button too. All controls are on the right side.

Bluetooth pairing is very quick and easy with the devices I have tried here, locking on quickly and holding the connection well. On my walking test, I have found the range to be more than adequate though I haven't been able to test that through flint walls! Running through the controls, I can report that music playback can be paused and restarted by a quick press of the power button, track forward/back via long-presses on the volume buttons, BassUP by pressing that button quickly (followed by a female announcement for on and off!), a quick double-tap on the power button to get an announcement as to battery state (high/medium/low), a medium-press on the power to invoke your phone's Assistant (good for Google as tested here - returning to what you were listening to after your enquiry - and apparently also for Siri) and quick-press the power button to answer/hang up phone calls. The microphone seems to handle voice calls perfectly well and my test conversation caused no problem either end.

The sound coming out of these to me, the layman, is excellent, very loud, good clear quality, but ludicrously bass-heavy. And this is without the BassUp engaged! I have had to use on-device music players with their own equaliser controls to tame that for what level of bass I think is low enough for me. I get the whole 'boom box' thing and maybe when I was younger I'd have been much more up for booming bass, but not now. This exceeds even the baseline settings which Marshall employ with their headphones, which is saying something! Forget about governors for volume in the EU, we need governors for bass! It's quite ludicrously set high.

Depends what you're listening to of course - so listening to rock it's off the scale with bass, but solo piano and it's OK. I've also been OK watching films (until there's some oil tanker explosion going on)! Like the Motion+ speaker, referred to above, what this needs is a controlling App for the phone. The App for the speaker works really well, but doesn't include this headset. I shall appeal to them. So, if you like bass, you'll love these. Then, if you haven't pounded your poor eardrums enough, you can tap the BassUP button which makes it even more ludicrous for bass. Very silly. BassUp technology analyzes your audio’s low frequencies in real-time and instantly increases the bass, apparently! Book yourself a hearing test for 6 months time!

Bluetooth 5.0 is present and one of the important things for me was to get round this lip-sync with video/film problem, latency, using bluetooth. As I said at the outset, all these fancy technologies just seem to complicate the whole issue and this month I've tried all sorts getting here. aptX, aptX HD, aptX-LL and most of them in my experience here provide a worse lip-sync than just making sure it's simple and BT5. Nothing fancier - as discussed with and advised by Steve Litchfield on Phones Show Chat. I still see a lag when watching video, but have found ways to minimise that now. Some apps and services are better than others in this respect, so Netflix/Amazon Prime/YouTube are much better than VLC, for example. The latter does have a manual 'delay' which can be set for each film/track/album (and then saved) however. Bluetooth remains very confusing to me with all these different standards flying around, but I think I have found a way forward which doesn't involve irritation!

The headset is also Hi-Res Audio Certified, which apparently means it supports "playback of music files that have a higher sampling frequency and/or bit depth than CD - 16bit/44.1kHz". It sounds great in that respect to me - but then maybe I couldn't tell the difference anyway! The unit is also equipped with 40mm dynamic drivers which apparently means (and again, I rely on the tech-heads here) that "headphones driver ranges from 20mm – 50mm in diameter and generally, a driver's size determines the loudness." So this is near the top! I'm sure there's more to it than that but I'm not here as a headphones/audio/sound engineer - rather reporting what I find and hear!

The 'newer and upgraded' version of these headphones from SoundCore is the Q20. Beware, as these are redesigned and offer noise cancellation but the payoff for that is half the battery life - and to add insult to injury, a return to microUSB for charging! Madness.

Anyone looking for a budget set of headphones which perform perfectly well (particularly if you like bass) could do much worse than these. They're about £45 but there seems to be a semi-permanent £10 voucher off at AmazonUK, so £35. The battery life is quite staggering (so you're much more likely to have a charge when you grab them) and the icing on the cake, USB-C. Highly recommended.
- December 16, 2019