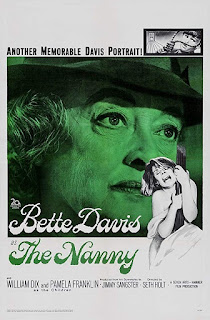 The Nanny is an excellent gripping British thriller starring Bette Davis as the ageing titular nanny pandering to generations of a wealthy British family - and adopting a very convincing British accent for the outing! She's a faithful family retainer having been nanny to at least two generations, current children, their parents and mum's sister too. It's a dramatic story reflecting the stuffy attitudes and values of the day!

Nanny is considered very much a part of the family, though reflecting that stuffy era, refers to the family members formally - and they, her. The story is built around her decades of service to the family, though set in the present 1960's. Bette Davis (Whatever Happened to Baby Jane?, All About Eve) encapsulates the role beautifully, mixing lovely caring trustworthy nanny with glimpses of the sinister, to keep the audience guessing!

British audiences of my age will know Wendy Craig not as a film star, but a TV sitcom one. The very funny but troubled mum in Butterflies and before that, Not in Front of the Children. Here, she plays another troubled mum to the 10-year old brat Joey along with a talked-about but nowhere to be seen at the outset, daughter Suzy. Suzy is played in flashbacks by the clearly very talented child-actor Angharad Aubrey but seemed to drop out of show business after this film. William Dix, who also later starred as Rex Harrison's Dr Doolittle's side-kick, plays the pretentious spoilt brat to perfection at the ripe age of 10. Clearly very confident as he shares most of the camera time with Davis.

There has been an incident in the family, which I won't give away, which is the basis of the decision to send brat Joey off to 'special' school for close attention and therapy. He comes back for a holiday at the outset of the film and comes across as a naughty, attention-seeking boy. The question which builds with excellent pace throughout the film is what's been done, who's done it, if it was done - and who's the bad guy/gal here - if there is one! Is someone being wrongly accused or is the audience being led a merry dance en route! Mum can't cope with all this so Craig plays a broken woman, taking drugs half the time to cope with life, children, husband, played by the very stuffy James Villiers (For Your Eyes Only), being away on business half the time and relying on nanny to hold her household together.

Mum's sister Pen, played by Jill Bennett (For Your Eyes Only, Moulin Rouge[1952]), is also a monied wreck with something wrong with her heart - meaning that she could keel over any minute, if stressed, and snuff it on the spot - especially if she can't reach her rescue-pills! So you can see that all these elements are cooking up a boiling pot of opportunity for thrills and spills as we head towards a climax.

The film is directed by the largely unknown Seth Holt, clearly influenced by Alfred Hitchcock as it bears many hallmarks of the master's work. It only 'feels' dated because of people's dress, behaviours, language and mode of speech of the day. Other than those elements it survives very well and remains a watchable thriller. It's atmospherically shot in black and white but also in what was considered 'widescreen' of the day, so not TV-ratio, and is pretty short and punchy at just an hour and a half. Not too long for the audience perched on the edge of their seats! It's a good ride and even though modern hardened audiences might now guess the outcome, I can just imagine the faces on the thrilled cinema-going audience of the day if they could see the screen through the smoke)! Give it a go. It's very enjoyable.
- December 21, 2019 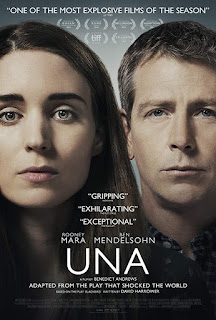