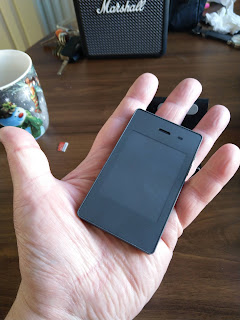 Tools, not Feeds they say at Light. This is a phone which pretty much does nothing of what we're used to doing these days with our pocket companions. They say that scrolling feeds is not good and that their basic tools are for getting things done. I wonder how many people reading this actually really want to disconnect with pretty much all of the network which they've built up around them. This really is not a phone review but the bones of a philosophical and social discussion.

Unlike KaiOS which is trying hard to integrate the likes of WhatsApp and FaceBook to a simple phone, LightOS says goodbye to social media, advertisements, news or email - like that's desirable in 2020. Maybe it is for some, but I hazard a guess that it's the very, very few who want to cut themselves off in this way. Designed to be used as little as possible, so humans can get back to interacting in the old-fashioned way. A phone that respects you! The price of your removal from the world? A staggering £265/$350! Available in Black or Light Grey.

The tools to which they refer are Telephone, SMS, a list of Contacts, an Alarm Clock, and maybe later Play Music, Voice Memos, Notes, Calendar, Weather app, Dictionary and some way to give the user Mapping Directions or call a Taxi (there is a GPS built-in). This was a crowd-source project and they really seem to have done well in terms of making it happen, both for the original Light Phone and now this second generation. I didn't ever see the first one, so I'm coming in cold to the second.

The thing that hits the user coming from a smartphone is that the device is tiny. It's got a 2.4" display with huge bezel-space around it - and the screen is black/white/gray e-ink. Think Kindle. The refresh-rate is as slow as an older generation Kindle's so every screen-tap means a wait before anything responds and that e-ink 'ghosting' remains when changing content. Screen-taps often don't register until the user realises that they have to press hard - this is no capacitive AMOLED! The screen-taps, apart from having lag, seem to want to be hit 'high' on the target. This is especially obvious when using the keyboard, which is very small indeed and only available in landscape. Not surprising really as in portrait it would be even smaller. Every time text input is needed, the screen auto-turns.

The phone is plastic and less than 4" in height, 2" across and about 1cm fat, taking into account the convex back - apparently done in order to pack in more battery over the flat original. It's 78g in weight and the whole package fits somewhere in the middle of my palm (see photo)! There's a earpiece speaker up the top where you'd expect, alongside a light sensor which enables auto-setting of the panel's light-up. Sadly, there's no USB-C here so we're back to microUSB for charging. They claim that the battery is good for 7 days on standby and 2 hours of talk-time. I am finding that those claims are about right as after using for about 3 days almost half of the charge is depleted. It's also IPX3 splash-resistant.

On the left is a NanoSIM Card Tray with the usual pokey-tool and a reasonably well made tray sliding in and out. The phone is capable of a 4G connection and it seems to do well with that. I have very successfully tethered other devices to it for a connection and it works beautifully. Quick to connect and maintains a good strong signal which is passes on to attached equipment. There's also a Hotspot option which I wasn't able to test but apparently works for up to 5 devices. Similarly, with making calls - the connection is strong, the person the other end can be heard well enough with the volume keys on the right adjusted to maximum and the person the other end hears the caller very clearly. The fact that the phone's microphone is well away from the mouth because of the size of the unit deters it not! (Though this is the same as many a bluetooth earpiece.) SMS works fine both ways, once you've been able to type it on the fiddly keyboard. There's no auto-correction to help, incidentally, so mistakes are rife.

Bluetooth 4.2 is present, though I'm not sure what it's for! Maybe it's for playing music, if and when the Music Player is added to the device - or perhaps there's a file-sharing facility coming too via a Manager. At the moment I can't seem to connect anything to the phone. There's also a 3.5mm audio-out socket up-top which again, will come in handy for listening to Music someday. There's no camera of course, as this would be too much of a distraction and make the user interact with the phone and world too much. The Alarm function works efficiently but the ring-tones for phone-calls and alarm are low in volume and buried in a pocket could easily be missed. In actual fact, without some sort of Music Player, it's hard to test the sound output.

On the top there's a 'wake' button which is also power on/off. Pressing that shows time, day, date, battery icon and percentage, wifi and cellular strength icons and a 'proceed' circle at the foot. Press this and you're launched into the Phone/SMS screen where you can select a dialing pad, SMS compose or Search for previously saved Contacts. Between the volume buttons on the right-side is a Menu button which takes the user to a Phone, Alarm or Settings.

In Settings, Phone takes you back to the main Phone screen mentioned above, alarm gives a numeric keypad to set a simple alarm and Settings launches a sub-menu including Airplane Mode toggle and Notifications which allows for Ringtone selection from a list of a few (all too quiet). Same for SMS and Alarm. There's also a privacy toggle to either show incoming messages on the Lock Screen or not. Moving onto Preferences allows for Time setting/display options, auto-capitalise on the Keyboard, a hearing-aid control option in Accessibility and another toggle for haptic-feedback when touching the screen - recommended to be left on to have some confirmation that your screen taps have worked as you wait during the delay! There's a simple numeric system passcode which can be set to get in and out of anything past the Lock Screen. Connectivity settings for WiFi, Bluetooth and Hotspot and options to open a Light Account, Reset the phone, check for LightOS Updates (which seem to come in almost daily) and so forth.

In order to do anything more at this stage, you need to head for the Light Website via a desktop browser and to the Light Dashboard. Here you sign in with your Light Account credentials and have access to a bunch of further much-easier-to-control and manage options. If the place where you hold your Contacts will let you Export them as a .vcf file (Google Contacts doesn't offer that) then they can be imported here and, as I understand it, when the phone is connected to WiFi will keep these in sync. It's not clear about how many the phone will hold or how many can be imported as I can't seem to execute this in any case. You can also also add Contacts manually but when I tried that, WiFi turned on, I waited and waited, and the one I added via the Dashboard didn't turn up on the phone. So, again, maybe features not yet finished. For me, an import from Google Contacts would make a huge difference, though clearly ongoingly, one would then need to keep doing that export/import to keep it up to date. Basic PIM functionality would make a big difference here. I get the no-social-media thing, but surely a properly syncing Calendar/Contacts/Email is a bare minimum, even for those dipping out from the world! Maybe significantly it talks to iCloud! Lastly, Device Info tells you all about the phone and records your IMEI number which could be handy if you lost it.

As I said at the outset, this is all about a philosophy and a becoming-trendy agenda to disconnect, or at least be able to choose to disconnect, from the deluge of media we're all bombarded with - and the evolved behaviour of humans to see the world through their phone-screens. To challenge people to ask themselves about how many human friends they have and how many virtual ones have replaced them. To question how humans now spend their time buried in technology instead of being out there paragliding, cycling or in the pub.

It's an ambitious project and an expensive one, to make this point. There's an option here for kids, I guess. Keep them off-grid from an early age, but still in touch. For my money, I think there's a much more desirable middle-road to be considered via the KaiOS option where a lot of the above is retained, but at least some of what we've got used to is also available. Maybe they're different philosophies at heart, but that's where my money would go - and quite a huge chunk less of it than this expensive luxury.

We were looking for an omelette maker as we hadn't had one for years and found this one which has turned out to be excellent! It's... 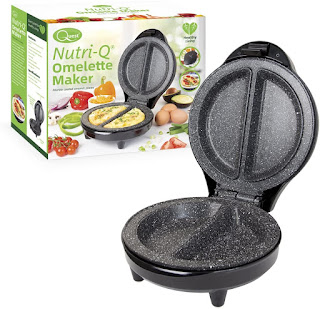