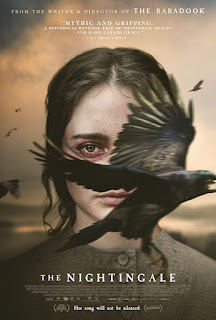 This is a really engaging film which is set in Australia in 1825 amongst the British Army at war with the Tasmanian Aborigines (Palawa) as the badly-behaved Empire tries to turn the country into a prison, shipping so-called convicts off there from the northern hemisphere. I'm no historian, but I think that's the bones of the background.

The story follows Clare, an Irish convict shipped there who is trying hard to build up her good behaviour towards being afforded her freedom. She has earned it when we join the story, but it's being unfairly denied by a bunch of soldiers who are using her for their pleasure. They won't let her go whilst she is still useful to them.

Things quickly get out of control as the most senior soldier is denied a promotion on the grounds that he can't control his rabble troops in his small outpost and Clare's husband confronts him just at the wrong time about her freedom. The soldiers indulge in acts of violence and cruelty to her, her husband and child. (There are some subtitles here and there as people slip into their native languages, including Gaelic, but the vast majority of the film is in English.)

This is where the story turns into a quest for revenge as Clare engages the services of an Aboriginal 'tracker' who can help her navigate and negotiate the Tasmanian wilderness as they follow the soldiers to the town where he's seeking his denied promotion. We follow the two sets of travellers now across the terrain, full of challenges and bumping into groups of people on both sides of the war, all behaving badly towards both women and Aborigines. As the tracker keeps out of the way of white people for fear of being shot or taken as slave, Clare keeps out of the way of everyone, particularly as she has no papers to prove to anyone that she's anything other than a convict.

What's interesting to watch throughout is the aggressive racist attitudes of pretty much everyone involved. The Aborigines hate the whites, the whites hate the Aborigines, the white men with freedom or power (either will do) are all happy to use and abuse the women, black or white, particularly if they're convicts (or in Clare's case, can't prove that she has earned her freedom) but also the likes of Clare who expects her tracker to be a bad person and treats him like an inferior with verbal abuse and unreasonable expectation.

Aisling Franciosi (The Fall, Game of Thrones) is phenomenal in the lead role as Clare. She doesn't put a foot wrong and is harrowingly convincing throughout. She demonstrates her revengeful plight and vulnerability through excellent acting as she heads towards her goal of doling out slices of justice. The pretty much unknown Baykali Ganambarr similarly executes the role of Billy the tracker with convincing ease and I guess that he's one to look out for going forward. Sam Claflin (Peaky Blinders, The Drift) and Damon Herriman (Mindhunter, Justified) play the rotten soldiers with grizzly nastiness and the rest of the cast fit in around them, all playing their parts well.

It's a frighteningly eye-opening watch and (presuming some level of accuracy) an education relating to what went on in the southern hemisphere in the 19th century as the British Empire went about its business dehumanising people of other nations and continents, taking by force what was not theirs. The film seems to have been shot in 1.37:1 which is kind of like an old TV screen. I'm not sure if this was an artistic or financial decision but certainly with a wide-screen ratio, much more could have been made of the amazing landscapes. It's not an easy watch and in amongst all these prejudices the viewer ends up not being quite sure who to side with - but invariably comes down on Clare's side. Highly recommended viewing.
- December 19, 2019