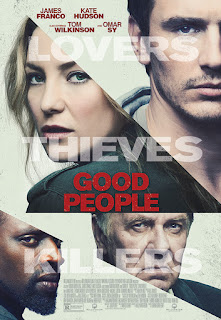 This is a cute little low-budget thriller with a similar idea to A Simple Plan. Based on a novel by Marcus Sakey of the same name and pulled together by Danish director Henrik Ruben Genz this could easily be glossed over and/or missed in lieu of time spent with bigger titles. That would be your loss!

American husband and wife Tom and Anna are living in a town-house in London renting out their basement to (unknown to them) a crook who's a bit of a career-criminal nasty. We start by watching him being involved in a violent money-grab from a club and introduced very early on just how nasty he is! Leap forward a while and Tom and Anna find him dead in their basement - and back to A Simple Plan - a bag full of cash.

Tom, played by James Franco (127 Hours, Pineapple Express) and Anna, by Kate Hudson (Almost Famous, Deepwater Horizon) are struggling in life. Running out of money, he's invested heavily in a property to renovate and she's hard-working too as she also tried to get herself pregnant. So now, faced with the moral dilemma, having no idea still that their tenant was a crook, they start to piece it together and wonder if they could get away with it, in order to rescue their sorry situation - including paying for IVF treatment.

Franco and Hudson are doing alright throughout all this. No awards likely at the time I'd imagine, but ably portraying the angst of the dilemma as their characters decide what to do next. We then get a deeper glimpse into the London underworld as the tenant's gang seek their stolen loot by even nastier methods of information extraction! Various Brits pop up throughout including the evergreen Tom Wilkinson (The Full Monty, The Happy Prince, Valkyrie) as the copper trying to deal with bent colleagues around him and even a couple of scenes for Anna Friel (Marcella, You Will Meet a Tall Dark Stranger, Pushing Daisies) all dipping in to join the fun.

The story develops as the gang have themselves double-crossed a foreigner with investments in what's going on and things head towards a gruesome and violent climax for many involved! So it's a tight little thriller which doesn't disappoint and is just about on the safe side of being forgettable! I enjoyed it and it passed 90 minutes quickly. Give it a go!
- December 22, 2019