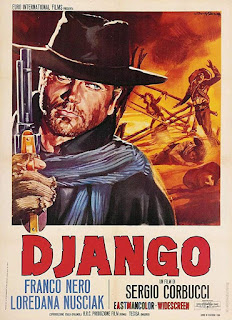 The shame of never having seen Django, the inspiration for Tarantino's Django Unchained, laid heavily on my shoulders, so when I saw it included with Amazon Prime Video I projected myself in for a viewing! A Spaghetti Western from the mid-1960's, dubbed, in this case, was a delight to consume and only Clint Eastwood was the missing genre hook!

Director/writer Sergio Corbucci and friend/colleague of Sergio Leone was responsible for a glut of stories and films between the 1950's and 1990's, many of which will have been missed by mainstream audiences outside of Italy, but specialising in low-budget shot-in-Europe looking-like-USA Spaghetti Westerns, alongside forays into drama and comedy. I have a list of films to catch up on and much to learn, from Ringo and His Golden Pistol (1966), The Hellbenders (1967), Navajo Joe (1966), The Great Silence (1968) and many more. There were many shots at using the Django name over the years for sequels but none hugely successful. Corbucci and star Franco Nero here only once got involved, reprising his role in Django Strikes Again (1987).

In the meantime, back to this film and we have the mysterious drifter, bizarrely dragging a wooden coffin behind him, walking, not on horseback! The question on everyone's lips for a good portion of the film is about the coffin. What's in it and why is this loner dragging it! On the Mexico/USA border he stumbles on a prostitute being abused by a group of bandits, deals with them, then has to negotiate a band of power-hungry racist hoods led by ex-Confederate Major Jackson with similar intentions, whilst avoiding a pool of quicksand!

As I said, Franco Nero stars, playing our civil war veteran loner in question, Django, who incidentally was roped in for a cameo appearance by Tarantino for Django Unchained, along with 1001 other projects and films over the last 60 plus years - and he's still going - including resurrecting his character in the forthcoming Django Lives! The list is so long, you'll have seen him in numbers of films. More recently for example, Letters to Juliet, Die Hard 2, Force 10 From Navarone and John Wick: Chapter 2. I told you I had much watching and learning ahead! He does play the central role very much like I'd expect from Eastwood though, similar anti-hero style, selfish crook with principles! Much of the acting is about a look, a style, menace, mystique and not dialogue.

The rest of the film unfolds in a genre-like skin and style as the audience backs the man who ends up alone, against everyone else around him, particularly getting in the middle of two gangs in conflict. Think A Fistful of Dollars. Fighting for survival amongst clever manipulation, plot, sub-plot, twists and turns in the storyline! It's all great fun and is notable for a few violent acts which got it banned in some countries for a couple of decades, though I'm not surprised that it was lifted - as by today's standards of exposure to gore and blood, it's nothing much. Again, Tarantino nods to some of this in Reservoir Dogs. The power of the tale nowadays is more sinister. Anyway, I won't give any of the plot away but encourage you to take a look.

The cast are all convincing for the day, make-up or not! Each brings something to the show and injects additional menace, humour, style and class. José Bódalo plays Hugo Rodriguez the bandits' leader, Loredana Nusciak, Maria the prostitute, Ángel Álvarez, Nathaniel the comic Bartender (think Silvanito in A Fistful of Dollars) and Eduardo Fajardo as the nasty Major Jackson! There's a large body of bodies(!) involved too and if you dig around in IMDb and Wikipedia there's much trivia and interesting facts to be found about the film and production. It's not a long film at just an hour and a half and the soundtrack by Luis Bacalov is an interesting and appropriate one, adding atmosphere to the fun!

I'm sure that there's much I have missed in terms of hooks into the genre and other work by all these fine people so it will be good to chew it over on the next Projector Room podcast with Gareth Myles. This film serves as a great backdrop to those investigating the genre like me and gives depth and understanding to some of the more recent work which have taken this earlier outing as inspiration and even a baseline for much more going forward. A must see, particularly while it remains included on Amazon Prime.
- December 29, 2019