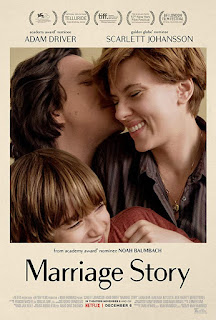 Marriage Story is going to be a bit of a Netflix Marmite film for many. There will be those who really don't want to spend a couple of hours watching a real-life conflict not only between two people who are really not sure if they want to be together and their son, but also lawyers on the battleground exhibiting their craft and others who will be able to, like me, focus on the fine performances.

Director Noah Baumbach (Frances Ha) created this film on the back of his real life experience amidst his divorce from Jennifer Jason Leigh. Before I knew that, it felt like the backdrop of actors, hollywood, theatre directors and luvvies-all-round was just getting in the way of a clean story of a similar ilk, such as the beautifully produced Kramer vs. Kramer. However, this soon pales into insignificance as the meat of the story centres around the nuclear family breaking down and how people deal with each other, careers and the legal profession.

Adam Driver (Girls, The Report) is the up-and-coming star of a generation. He's talented and can seemingly turn his ability to any role he wishes to embrace. The military's loss is cinema's gain. In this role he embraces the position of workaholic theatre director, good dad and laid-back Mr Nice Guy alongside the new situation in which he finds himself. Having to fight for his marriage, shared custody of his child and the legal profession all at the same time. He does this with naive empathy, lost in a sea of new experiences, not quite understanding how this can be happening. Scarlett Johansson (Vicky Cristina Barcelona, Scoop, Match Point) is equally convincing as the actress becoming famous and successful whilst keeping a lid on family responsibilities, dwindling love and being baffled by lawyers too.

The chemistry between the two is infectious. They, and the film, are engaging from the start. We jump in as there's a narration going on. First him, then her, talking about the good and bad aspects of each other and their marriage. We later find out that these are prepared lists created for the benefit of a marriage guidance process, but it's an excellent scene-setting technique as the audience quickly learns a huge amount about the family and their background. It is clear that they are deeply in love but that life is getting in the way, particularly their dedication to their careers, path dividing them as it trundles along.

There's one scene in the middle of the film where the pair try to sit down and talk with other but the attempt falls, sweeps between raw emotion, anger, frustration, bitterness, tears and transparent deep love. The scene is beautifully acted and is watched by all, eyes-wide! A super example of a scene within a film which almost doesn't need the context of the rest of the story. Check it out. The emotions expressed throughout the film are so convincingly expressed and performed that the viewer is sucked in, well and truly at every turn.

There's some comic moments in there too. At one point there's a woman appointented by the court to spend time with each of them in their normal habitat. Her performance is very funny as she doesn't quite know how to react to what's going on around her whilst Driver's character is trying far too hard to make it all look normal! There's Johansson's sister running around stressed as she's charged with the task of serving the divorce papers on him. She's played by Karen Duvall, who was excellent recently in the TV series Unbelievable. Then there's her mum, comically played by Julie Hagerty, who I still can't see outside of auto-pilot mode in Airplane! The family members are painted up as a real bunch of quirky people, as you can see. At this point, it really starts to feel like it's a Woody Allen comedy with all the usual hooks into funny New York characters and cast playing off against each other to great amusement with reflections of the absurdity of real life - often led by Allen favourite Wallace Shawn. There are also nods to Allen in terms of the shooting style as often we see cameras left shooting empty rooms whilst actors are out of them, not in shot.

The son (Azhy Robertson) looks very much like Doc in The Shining or, at a stretch even the kid in Kramer vs. Kramer. He plays his part very well. He's not just along for the ride but has some real dialogue and even at his young age has been chosen well with a budding ability to act. Then we come to the legal teams and actors again often plucked from Allen's casting book. Alan Alda plays an ageing family lawyer quite brilliantly. He's clearly had enough of hard-nosed legal wrangles and having tried to retire, really isn't up for the modern cut-throat world of Ally McBeals! It's great to see him again, thoughts of *M*A*S*H* of course! Laura Dern (Blue Velvet, Jurassic Park, Twin Peaks) pops up as one of the lawyers out to cut throats and embraces the role with gusto! Against her we have Ray Liotta (Hannibal, Goodfellas) in a smaller part, but one in which he exudes a similar gusto in each of his scenes! The pair of them up against each other in the near-informal courtroom is another scene-in-film to watch and enjoy more than once.

It's a film that, as I said at the outset, needs to be watched for the performances more than story, as they are, without exception, quite superb. The backdrop and sets, directorial style and production values are all very interesting and high. It's a film made for awards by Netflix and that's clearly where it is heading. If you really don't fancy the subject matter and think it looks like it is about couples bickering, then think again. You'll be delighted with, if nothing else, the exceptional two leads. Highly recommended.
at December 10, 2019