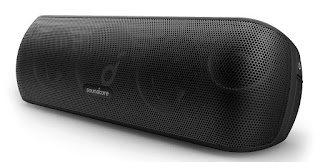 I wasn’t particularly in the market for another bluetooth speaker, but Amazon Prime Day came along again and dangled carrots - and I can always make good use of them! We’ve seen addiction in various forms in this Manor, from torches to coffee and much between - I think this one’s mine! Some bargains are real bargains - and this was one. Reduced from the RRP of £99 to half-price, it had to be snapped up!

SoundCore is a brand of Anker and they’ve produced some spankin’ gear in recent years. Many of us have gushed over the quality and value-for-money on display. Yes, by paying much bigger prices you can get a better, bigger sound, but these units from Anker always punch well above their weight and sound fantastic. This one reminds me of the design of some of the Sony units - you know, the ones that often have flashing lights - so a fairly boring ‘bar’ shape. It’s also conservative black and there appear to be no other colour options. But I’m OK with black - perhaps the colour a speaker should be!

The Motion+ is built like a brick and weighs as much as a few of them - in fact, just over 1Kg! Take this to the beach or BBQ in a rucksack and you’ll know you’re carrying it. It’s about a foot wide, 3” tall and 3” deep. It sits in one position pointing it's face at the user with a 15° raise. On the bottom are two rubber feet, one at each end to stop it sliding around anywhere, not that it’s likely to with this weight! On the right end is a power button and underneath it, a very thick rubber ‘bung’ which when pulled out reveals a 3.5mm audio-in (aux) socket and USB-C port. Up top, there’s a bluetooth button and light, bass button and light, volume controls and a multi-function button. The buttons are all tactile in the usual Anker way, so can be selected by feel too. The front is covered with a black grille (which sweeps round the ends) with holes big enough to see through to the 5 speakers. Overall it’s a very attractive unit. The rubber material it’s made from is really grippy right around it, making it feel premium and classy - you shouldn’t drop this, nor need a case.

Much like the aforementioned Sony units which I previously reviewed two of these units can be connected to make for a wider stereo (or just bigger) sound if needed at an event, the difference here being that Anker provide an app for iOS or Android to control all aspects of the connection - and indeed sound output. The app hooks up via bluetooth of course and gives a whole bunch of options from auto-power-off (as a sleep-timer), play/pause, volume control, remote power-off but most importantly an equaliser with a range of presets and even a ‘custom’ mode for control of the sound output. I have found that the Bass button on the top is largely redundant because of this, though that will vary on music listened to, taste and how much bass you actually want to be pounded with! If you leave the equalisation flat, the bass boost button certain beefs up the lower-end frequencies and could be useful at a party. I find it mostly overpowering and don’t use it - it’s bass-orientated enough as it is! But with that equaliser employed, the output can be adjusted ad infinitum. I love using my Marshall Stockwell bluetooth speaker on a daily basis which I also reviewed for many reasons, but one of them was the physical volume, bass and treble knobs on top. An app, though not quite as handy as that, is certainly a good second-best over factory-adjusted sound as supplied and a 'bass' button (or nothing), leaving equalisation to phone's Music apps.

The Multi-Function button, top-centre, enables the hook-up of the two Motion+ speakers along with track-skipping (both ways) and press it for two seconds to invoke Google Assistant/Siri when a phone is connected (or just use the Assistants in the usual way on the phone and it’ll cut off the music while it deals with your query and come back when done). Call management is also handled via the same button with various presses for various functions, switching to and from the speaker’s sound and microphone to execute. Nothing particularly exceptional in all this, but works well. Bluetooth hooks up quickly and easily and boasts v5 with aptX technology.

The power button on the right is pressed for on and long-pressed for off. The unit is powered by a 6700mAh battery which they claim is good for 12 hours playback. On testing here, that figure can be reached by medium volume and aux plugged in for music, not bluetooth. Whack the volume up and use bluetooth and (I'm guessing) you’re looking at only just over half that figure (also based on other people's testing who have somewhere to put the speaker onto full volume for 6 hours without getting arrested for disturbing the peace)! Middling volume with bluetooth use gets me about 9hrs. I don’t intend to use this away from power much, so it’s good for me, but those looking to get out and about with it might want to consider these figures. The good news is that it’s equipped with USB-C (hurrah)! Charging from flat takes about 4 hours, depending on charger/cable and so on - and there’s no reverse-charging here, so no emergency top-up for your withering phone at the beach. Talking of beaches, the unit is waterproofed to IPX7, so clean water to 3 feet for half-hour. Should be safe enough for general abuse out and about but not dropped in the sea!

And so to the sound - the main reason we're here! Output is 30W and pushed out via the "twin 40kHz ultra high-frequency tweeters, neodymium woofers, and passive radiators" as they say. Whatever the technical data, I'm hearing amazing sound with a top volume far too high for me to use routinely. The bass thumps out, can be (as I said) boosted and enhanced in various ways and vibration through anything it is sitting on are marked! The equaliser can be used to very good effect to tweak preferred sound, the high-end sharp and clear, the mid-tones clean and wonderful to my ears. Sitting in that mid-range, as I often do these days, solo piano and jazz stuff sounds gorgeous with just the right 'feel' of 'being there'. Stunning and delightful.

I'm no audiophile, as you might know, report on what I hear and maybe am easily impressed. I was equally wow'd by the aforementioned Sony speakers which I had, but this seems like a step forward all this time later, particularly with remote control of the unit via the app and for me, house littered now with USB-C chargers, very handy power options left, right and centre. Sadly the half-price sale has now gone but even at full price it feels like it's worth it - though I guess that when you get up to that price range there's much more competition to consider. In any case, very highly recommended. Find out more about the SoundCore Motion+
- July 28, 2019

Over the last couple of years, I have got fed up with Google's 'comfy slippers' At a Glance Homescreen widget not working proper...