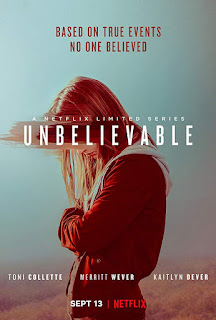 This excellent 2019 drama by writer, director, producer Susannah Grant (Erin Brockovich) is a wonderful demonstration of the always-improving production quality coming out of the Netflix studios as the company grows in confidence and resources.

It's the true story of the hunt for a serial rapist by authorities in America. It is centred around the first of his victims, Marie, who had also up until then, been a victim of the effects of poorly managed and executed children and foster services since she was three years old. As Marie plucked up the courage and confidence to report the rape she suffered, the local police rapidly talked her out of it, dismissed the case and charged her with wasting police time. She had now become a victim of the police as well.

The series is made up of eight episodes of about 50 minutes and follows Marie's life throughout the events - and for the few years following, while the rapist continued to chalk up more victims. The timeline jumps back and forward across a few years to develop the events around Marie for the viewers whilst also tracking the efforts to catch the man of two female detectives during the later time period.

The delivery is much more drama than thriller, reflecting the fact that this was a serious and true series of events, instead of just a creation for TV. The pacing is handled excellently as information unfolds about the events, more victims come forward and the detectives (and their team) work harder to bring the man to justice. It demonstrates that there are good people involved in the systems trying to care and support people but highlights where systems, regardless of individual good intentions, lets people down who are in need.

The main leads are near faultless in their acting, the young Kaitlyn Dever (Justified, Last Man Standing) as Marie - clearly a super talent and one to watch going forward. A very difficult role which demanded a range of emotions and behaviours, which she pulled off at every turn. Toni Collette (The Sixth Sense, Muriel's Wedding, Little Miss Sunshine) and Merritt Wever (Godless, Signs, Nurse Jackie) play the two detectives very convincingly. There's a real chemistry between them which survives their characters' differences of approach. The supporting cast, which includes Elizabeth Marvel (Fargo), execute their roles similarly well - clearly much care was taken in casting with all sorts of names popping up, big roles and small.

It's a sad and harrowing depiction as emotions run high. Once again, knowing that the story is true makes it more powerful and meaningful as people involved tackle their trauma whilst helping to provide information. Very highly recommended viewing and once again, worth the Netflix subscription going forward. If the quality of the productions contine at this pace I shall have to stop whining about the cost!
at September 18, 2019