The Widow of Saint-Pierre 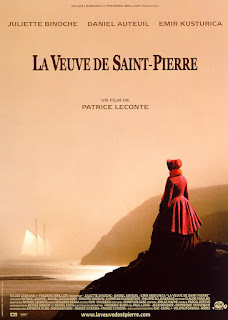 The original title of this French film from the year 2000 is La veuve de Saint-Pierre and I recently got a used copy on the cheap to view on DVD. It's the moving (allegedly) true story of crime, punishment, rehabilitation, passion, compassion, intolerance and prejudice.

Firstly, "Saint Pierre and Miquelon is a French overseas collectivity in the Western Hemisphere and the Northern Hemisphere. It consists of an island archipelago off the coast of Newfoundland near North America. The collectivity shares a maritime boundary with Canada" (Wikipedia) for those, like me, who were ignorant! Our story is set around 1850 and familiarises us with a Police Captain and his wife, who have been relocated to the island from Paris, for reasons which never quite become clear. The community around them is a hard-working one in which there are many widows, as men often lose their lives at sea.

One dark night, Auguste, played extremely passively by Emir Kusturica, and his friend in a mad drunken night off, go to frighten their retired boss for fun but one thing leads to another and they end up killing him. Auguste takes the rap for it, as he actually plunged the knife. He is sentenced to be executed by the guillotine. Only problem being, for the town's council and the captain, is that they don't have a guillotine - nor anyone willing to act as executioner! Augustine is locked up in the Police compound whilst they send to Paris for one and try to find someone to do it.

Police Captain Jean is played by Daniel Auteuil (Un Coeur en Hiver, The Girl on the Bridge) with much conviction, portraying a man madly in love with his wife Pauline, played by Juliette Binoche (Certified Copy, The 33, Damage) who, in turn, is trying very hard to make a life for them both in this outpost. She holds in high regard a garden, greenery and a greenhouse in order to grow plants to remind her of home, but has nobody to help her achieve this end. Jean holds Auguste in his cell in the compound and Pauline convinces him to let her make use of his labour as they await the guillotine.

Auguste respects his level of freedom and responds responsibly, resigning himself to his fate but embraces his own rehabilitation in becoming a great help not only to Pauline, but as time goes on, many members of the community. So much so, that as the guillotine approaches, the people rise up against the police and council to try to stop justice being served on this popular and helpful member of their community. What then transpires are the events surrounding the effect of their attempted intervention on Auguste, the officials, Pauline, Jean and police as many of them are wrenched between the moral high-road and humanitarianism, deciding on a friend's life.

Director Patrice Laconte (The Girl on the Bridge) ensures that Binoche plays her part to reflect a personal, and at times, sexual tension between her character and the criminal, never overplayed though, bubbling under the flowing skirts or decency of the time. Binoche does this beautifully of course, as we'd expect, as the rest of the cast pull their weight behind her. The three leads play very nicely off of each other and there's always an understated tension reflecting things not said, actions not taken and thoughts not aired.

Some of the scenery and photography is breathtaking and is shot making the most of the wide cinema screen in this setting with wide swings of season and much sea mist. The sets are tight, mostly within the houses of the community on the island but with interior detail of buildings well thought out and reflective of the time. It's a wonderful film which in some ways is so passive that it feels much more of a reflective journey than it is, but at the same time, fraught with tension which induces empathy for the characters having to face the turmoil. Recommended intelligent viewing.
- July 13, 2019