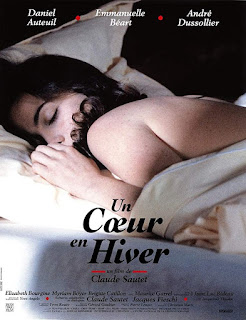 Unqualified as I am to critique European cinema, I know what I like and enjoy watching. I have visited this 1992 French drama from the pen and directional command of Claude Sautet a number of times and am drawn back time and again to look, see and find more.

As is often the case with European films, the story is simple. There's little action and thrill, often more a study of real life, real people finding their way through real situations. One could almost consider it dull and documentary in content, except for the way it is crafted and beautifully executed on screen.

Stephane is a repairer of stringed instruments in Paris. His business partner, Maxine, is a buyer and seller of the instruments. Camille is an up-and-coming concert violinist who, for most of the duration of the film is engaged in a recording studio, making records. The premise is simple. Camille meets Maxine, they begin a relationship which he's more into than her, she meets Stephane and falls in love with him, Stephane rejects her interest and later, advances. The focus of and interest in the film therein lies with the life of Stephane and trying to understand his motives and actions.

Stephane is a solitary soul, living for his work, not interested in anything much except his workshop and platonic friendship with a girl who works in a bookshop across from their frequented cafe, near the aforementioned recording studio. Nothing is ever said, but the undertones suggest that actually he only has romantic eyes for Maxine and when Maxine announces that he is involved with Camille, Stephane is visibly shaken. As time goes on, the unhappy Camille pays more attention to Stephane and eventually corners him and forces him to be blunt, cold and rejectful. He doesn't want her.

The story then develops mainly between the three of them, the juxtaposition of roles and places in which they find themselves and wedges are driven between them. There are interesting asides going on with Camille living long-term with her mentor and facilitator female friend, who becomes jealous of her attentions - and an interlacing of themes regarding love, familiarity and rejection between Stephane and his ageing parents.

Stephane is played beautifully by Daniel Auteuil (Caché, Jean de Florette, Le placard) who has a list of film credits as long as your arm in Europe and the kind of actor that you will have seen in something. Ironically, he was, in real life married for a time to the beautiful Emmanuelle Béart (Mission: Impossible, Hell, Nelly & Monsieur Arnaud) who plays with equal quality the role of Camille. The third part of the trio, Maxine, is played supportingly by André Dussollier (A Very Long Engagement, [the voice in] Amélie, Colonel Chabert) and also has a grand pedigree in European cinema, forming the bonding gel between the other two, main players.

It's a moving and poignant film, beautifully shot with plenty of interiors in typical European style, smart use of shallow depth of field and passive camerawork, not afraid to allow the action at times to continue out of shot. The violin music is so good as a part of the score that you'd think it was dubbed or that Béart actually is a violinist - apparently not, she learnt for a year for the role! It's a character study of one, two or three people, depending on how you view it, which embraces meaningful silences, long looks, controlled emotion and thoughtful musing. It's almost Woody Allen in so many ways, without the comedy.

The takeaway elements of this film are not on a plate for the viewer, rather thoughtful reflection will enable a grasp of what's going on, what it's about and indeed how much they can digest. There's no easy outcomes, often more questions than answers and a film that looks for the viewer to join the dots. Highly recommended.
- November 13, 2018