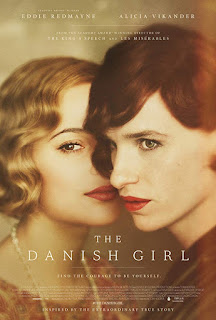 This 2015 Tom Hooper film is staged as a fictitious story loosely based around the life of the Danish artist Einar Wegener, who became Lili Elbe. Hooper previously directed Les Misérables and the excellent The King's Speech. Having never heard of this person, I did some research and the facts as recorded, pretty much follow the line of the film's story, what was recorded in the David Ebershoff novel of the same name and Elbe's autobiography Man Into Woman, so I'm not sure where the fiction comes in!

Einar/Lili is played by Eddie Redmayne (who made such an excellent job of previously portraying Stephen Hawking in The Theory of Everything) and his wife Gerda, by the gorgeous Swede Alicia Vikander (Tomb Raider [2018], The Light Between Oceans, Ex-Machina). The story is about Einar's journey of discovery as a man, believing that he was born the wrong gender, and subsequent fight with himself, his wife and those around him to gain acceptance, initially as a transvestite but later as transgender.

At the outset of the film, the couple appear to be very happy, madly in love, enjoying each other and creating their art. It's when his wife's model goes AWOL that Einar steps in, wearing some female clothes - and starts to like it, believing eventually that he no longer wants to be a man. If you're interested in more details about this, the Wiki page carries much of it, including more on Klinefelter syndrome, and transgender pioneering but for now, back to the film!

We start off in Denmark, head off across Europe with exhibitions of work for both husband and wife before settling in Paris where, by this time, Lili has mostly taken over Einar's life and feels that she can live openly in the liberated French capital. Redmayne plays both roles amazingly well. Just enough man before and just enough woman after. Some of the stages require imagination, but let's not forget that we're going into this knowing. Many people who bump into Lili on the street are taken in - and if you look at the real photo of her on the Wiki page, it's easy to see how. Redmayne is clearly very talented and is able to convince the viewer most of the way along. Emotional upheaval, disbelief, not understanding, anxiety at the so-called professionals trying to help him - the required range of acting is pretty much nailed.

Vikander too, coming from being a happily married woman, through not understanding what is going on, facing major change and loss, mixed emotions of loving her husband so very much, but wanting him to be happy. Torn between the desire to help him to be what he needs to be but facing the potential of losing a husband, towards acceptance through pain but driven by love for the person, man or woman. She also raises to the challenge and again, demonstrates excellent acting throughout. They're both very convincing and well cast to deliver the sadness and turmoil through to the outcome, which I won't spoil here. Also supported excellently by Adrian Schiller, Amber Heard and Emerald Fennell.

The direction and photography are excellent, with a thoughtful approach reflecting the artistic stage, compositionally, via lighting and various focusing techniques. The sets and costume reflect the time and place beautifully along with people's level of 'stuffiness' and attitudes to change and prejudice. It's an excellent film, poignant, sad, a biopic which has a lot to say about the 20th century, shifting acceptance and levels of understanding in both everyday life and within medical advancement. I really didn't think I'd like this subject matter particularly and sat down to watch, expecting to turn off, but it quickly had me hooked and the two leads certainly contributed hugely to that focus. Highly recommended.
- July 03, 2019