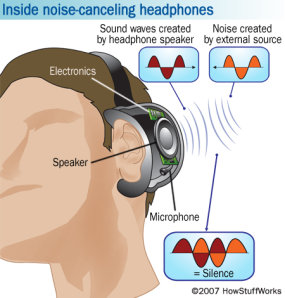 This is very much a generic review from a newcomer to noise cancelling headphones from someone who has never before used the technology - and isn't really a big headphones user. So no previous experience or yardstick with which to compare this TaoTronic SoundSurge 46 headset, nor with which it is supposed to be capable.

I turned to the HowStuffWorks' ANC Page to help explain the principle of what is going on here and this diagram very basically sums up the principle. By actively erasing lower-frequency sound waves they actually create their own sound waves that mimic the incoming noise in every respect except one: the headphone's sound waves are 180 degrees out of phase with the intruding waves. From the illustration we can see how this works. Notice that the two waves (the one coming from the noise-cancelling headphone and the one associated with the ambient noise) have the same amplitude and frequency, but their crests and troughs (compressions and rarefactions) are arranged so that the crests (compressions) of one wave line up with the troughs (rarefactions) of the other wave and vice versa. In essence, the two waves cancel each other out, a phenomenon known as destructive interference. The result: the listener can focus on the sounds he wants to hear.

So that's the theory, but does it work - for these virgin ears! This particular headset which was sent over for review can be purchased for about £70 at AmazonUK and $80 at AmazonUSA but there are plenty of other models, styles, headphones, earphones, plugs, wired and/or wireless out there to choose from. This set is presented in a semi-rigid zipped black case with a Velcro strap inside to hold the headphones in place and a netted pocket on the other side to hold the supplied 3ft long 3.5mm to 3.5mm cable, USB-A to microUSB charging cable and some strange-looking twin-adapter which, on further investigation, seems to be for people on planes - to convert the plane's twin 3.5mm mono headphone socket to a single stereo 3.5mm headphone socket via the armrest of the aeroplane seat. Having not set foot on an aircraft since 1842, this is all alien to me!

The headset itself is an over-ears model which sits comfortably for a good time, at least on my head. The spongy pads are soft and mould well to the ear-surround and the adjustment for height has good travel, distance and firmness, holding in place well for any setting. The two cups swivel around about 100 degrees for different shaped heads and so forth. The headband is black plastic with good padding. Plastics are used throughout cunningly disguised here and there as metal with pseudo-chrome painted on chamfered edges. The unit does not 'fold', so for travel, the allowance in luggage needs consideration. They generally feel very well made and like they would have a reasonable lifespan.

The left cup houses the microUSB charging port. Shame it's not USB-C, but for the target market, maybe houses remain littered with microUSB facilities so perhaps this could be considered an advantage. On the right cup is where all the rest of the action happens and it is circled with buttons, ports, knobs and controls! Firstly, a simple press-in power button which is short-pressed to power up the unit, long-pressed for bluetooth pairing and doubles up as a Play/Pause button. Next is a volume rocker which is reasonably sized and controls volume as it should. Then we have the 3.5mm audio-in socket, blue light for bluetooth, microphone and finally, facing the front, the ANC switch which is a firm on/off slider with a glowing green light inside when active.

The volume buttons can be long-pressed for previous/next track and there's a level of call handling if you're paired with a phone. Power button confirms answering a call and hangs up afterwards, long-press to reject an incoming call and even a double-press function to redial, initiating a call (as long as it's the same as the last one dialled)! The power button can be long-pressed to start the bluetooth pairing procedure. I tried it on a few devices here and it hooked up perfectly every time, no fuss. As you might expect, a blue light flashes fast while that's going on and has a steady flash whilst it's active and being used.

The manufacturer claims that 2 hours of playback can be achieved from a 5 minute charge - so I tested that! Five minute charge from flat, using an ordinary USB-A 2.1A/5V socket, full volume playback via bluetooth, with ANC on - and I got an hour and a half, but presumably without ANC on and a medium volume they won't be fair off with the claim.

They further claim that a full charge can be achieved from flat in 45 minutes (which it did) and that a full charge will last 30 hours of playback. All these figures of course depend on volume and whether or not bluetooth/ANC is being used so your mileage WILL vary! Following initial testing, continuous playback, max volume, ANC on, the full battery lasted 10 hours, so presumably the 30 hours quoted is likely to be achieved by wired use and no ANC, at medium volume. Other reviewers' experience tends to support that, some reporting over 25 hours with basic use but much less with bluetooth/ANC.

The bluetooth connectivity is not the best I've used for distance inside a house. During the test I walked from one room, through a corridor and into another room and there was significant breakup. I would have had at that point two house walls between the unit and phone, but only ordinary walls - not thick flint ones, and only about 15 feet away. I gave up on my line-of-sight test at 100 yards, as it was still working perfectly (and I ran into a brick wall)!

When all else fails and you have a flat battery though, plug in the 3.5mm cable. I was surprised (perhaps I shouldn't have been) that the ANC just doesn't work. Not only that, but the headphones really do become passive - even the volume controls don't work! Great to have an old fashioned manual backup though! I also discovered that even if I plug in the 3.5mm and the power-cord at the same time (and tie myself up with wires!), the ANC still doesn't work. So there's no power-pass-through to the 3.5mm options, the ANC only works with bluetooth. And maybe that's normal for ANC headphones. I have no previous experience to draw on.

To the sound, then. Testing here against my AKG K701 reference headphones and the very bass-orientated Marshall Monitor set. I'm no audiophile, as you probably know, and most headphones sound great to my ears, but I can tell the difference. The AKG sound is clearer and cleaner with sounds across the range sounding just perfect, good volume, not too much bass, not too much high-end and very nice mids. Perfect for my kind of music. The Marshall set are very loud and by default, very bassy. They clamp onto my head like a vice and short-term listening is all I can manage before getting them off me! Maybe they're designed for small heads! But the bass is booming, mids are OK and highs pointed. The TaoTronic set here in comparison has pretty good volume, is a little too bass-adjusted for my personal taste but others will love this shift. For the music I rarely listen to these days, like rock, they perform very well. Not quite Marshall depth, but very good. The highs are pleasant and mid-tones clear. Overall, without ANC turned on, they are a very decent set of cans with a very nice sound which would please all but the fussy audiophile.

Turning on the ANC, the initial sledgehammer impression is that all the bass has gone! The bass just seems to drop out completely, which would be no good for the above-mentioned rock-fan, but for me and the music I listen to, it's more of a bonus for that to happen. Again, each to their own (and there are plenty of Music apps/machines out there on which equalisation can adjust sound output to compensate.) The clean mid-tones, jazz, solo piano still sound very good indeed. As for the ANC, yes, it certainly does work very well for reducing constant droning noises such as an electric fan, car engine, aircraft (no doubt). There's a marked and huge reduction in collection of those constant sounds and coming in here for the first time testing the tech, it's very impressive indeed. I had a 'wow' moment when I first heard what was happening. However, this set at least, doesn't deal well with sharp, loud and unexpected noises - like someone stood next to you suddenly shouting. Or a car horn. But maybe as a safety feature that's a good thing - keep out annoying noises but be alert to important noises? Depends on your view I guess. Maybe more expensive units have even better tech which also deal with such unexpected peaks of noise.

Some users complain of a 'white noise' in a quiet environment, which to be honest, I can't hear - but then maybe my ears and hearing are beyond fine-enough perception in middle-age! I would have thought that the point is more about why a user would turn the ANC on in a quiet environment anyway? You don't need it! Unless it's to dumb-down the bass, in the case of this unit? Either way, everyone will find their own way - and everyone has different hearing and ears, so this is clearly a very personal thing.

I'm pleased that I have at last had a chance to hear ANC working. I do wish that it worked when wired as I'm more likely to use earphones that way. On balance though, my summary is that in my life, I really don't need ANC. I don't fly on planes or go on trains, stay long enough in a car these days nor have to endure an environment with low-level hum. But it has been fabulous to experience it working - amazing technology which has a real world use for lots of people. Apart from the hit on battery, if I needed this, I'd never use anything else. Clever stuff, I muse as I head back to my AKG's!
- July 22, 2019

Email ThisBlogThis!Share to TwitterShare to FacebookShare to Pinterest
Labels: Mobile Phones, Whatever Works