Nokia 8 Revisited - Keep Your Cash in the Bank! 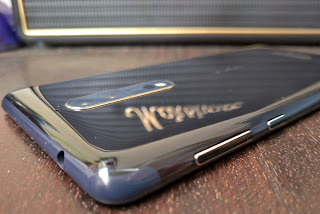 Deciding which mobile phone to buy is a complicated issue, which keeps us talking about it! It's true that more people than ever are settling on a device and staying there, like we eventually did with our home computers a few years ago. They got good enough to last longer. So is the same with phones now and which one is right for each person is a very individual choice.

I'm here looking at the Nokia 8 to see how many boxes it ticks for me, but maybe you can do the same for your devices - even if, like this one, it's been tucked away for quite some time whilst shinier, newer models grab your attention. Do you really need to pay out for the latest chipset, more RAM, zooming camera, ultrasonic under-glass fingerprint scanner, face recognition software and so on? There is certainly some benefit from taking stock, considering what's important to you and just seeing if something from yesteryear might be just as interesting as scratching that itch spending your hard-earned on the latest and greatest.

The Nokia 8 was released in October 2017, so as I write it's heading for 2 years old. My 128GB model with 6GB RAM was bought in January 2018, so 18 months in my care. The 64GB model with 4GB RAM was the more common one, but this one has clear advantages - for those of us who want them and for whom they fit with use patterns.

Let's start with that storage. 128GB working in tandem with a microSD Card slot, which is playing very nicely with my 512GB Samsung card. The boxes being ticked here for me (the serial SIM Card swapper) are, enough on-board storage to hold my 50GB of ripped CD's, books on Amazon Kindle, books on Google Play Books, audio-books on Audible and a bunch of music videos - all of which sit tight, not on a card, so that when I swap phones I don't have to think about that baseline. (I do accept that most people wouldn't need to think about that, but this is personal!) The microSD Card slot means that I can carry with me - in my phone - ripped  DVD's (pretty much) as many as I like. I rip DVD's to mobile-viewing standard which means that each is between 600MB and 1GB generally and my collection is currently using about 450GB of that card. Hopefully by the time it reaches 512GB, the 1TB card just released won't be a silly price any longer. Back-up plan is to assign TV shows to one card and films to another - but that's one for later!

Front-facing fingerprint sensor is next. We're heading that way with improving under-glass technology but are not there yet. Again, this is a personal one but I have always been bugged by fingerprint sensors pretty much anywhere else! Sony, Motorola, Razer, now Samsung all playing around with side-mounting which is, in my view, the worst place. For some, the back placement is good, I accept - those whose phones live in pockets, but my tick-box is for the front, every time. Even though the FPS is small'ish and the Back and Recents capacitive buttons are baked into the hardware, I'd still rather have this than many others' solutions. The buttons can be set to stay lit whenever the screen is on and it works a treat when the phone is on a desk/table.

The chin and forehead are substantial. One might even say old-fashioned in the size they take up but the 5.3" IPS LCD 16:9 screen sits in the middle beautifully and it can be argued that this phone is the perfect size for handling, size and grip. And no stupid notch! The 544ppi ensures a razor-sharp display and Gorilla Glass 5 with no dumb coating over it ensures that they'll be no casual scratching. The LCD remains the brightest I've seen on any phone and my only concern about it is that the AoD is not the same as was afforded the Nokia AMOLED models, nor even the Nokia 7 Plus, 6.1 etc. The AoD can be set to stay on for 20 minutes maximum, then the phone needs to be nudged or lifted to start the 20 minute clock again. It could be done with an LCD, as others have proved with other models, so sad that it's not great here. Furthermore, the AoD is linked to the Adaptive Brightness which doesn't do a great job keeping it bright enough. But maybe a small price to pay for all the rest of the goodness.

The Snapdragon 835 chipset and 6GB RAM make this Nokia 8 feel like it's still bang up to date. There's not a lag or delay anywhere across the UI or switching tasks. Alright, so there are newer and faster processors now, nearly 2 years on, but this was ahead of its time on release and is still perfectly functional. With such a clean implementation of Android, which it is, who needs more - even the current Pixel models still have 4GB RAM.

One of the drawbacks of the Nokia 8, not even having started out on life under the AndroidOne banner, is that I doubt it will be afforded Android Q when it comes along. Having said that, Nokia have kept the phone right up to date with Security Updates, right alongside other models which do have the guarantee of 2 updates and 3 years of Security. So we'll see in the coming months if it's been forgotten. Don't forget that this device arrived with Nougat on-board, so it's already been through Oreo and Pie.

The phone is built from aluminium and glass, the former of which sweeps around the back from the screen making a beautiful rounded pebble-like design which, without a case on, feels premium in the hand. The buttons and camera island surround have chamfered edges and add to the classy feel. It's not rated highly for environment resistance, but the IP5/4 will help with splashes and rain etc.

The speaker, though not the best in quality, is very loud. As always, equalisation can be achieved through software to a large degree and being able to start that equation with a good loud baseline makes for plenty of options to enable super sound. It's a mono bottom-firing speaker, which sits next to the USB-C port but that doesn't seem to be a problem for most people's demands. The Nokia 8 also came with a 3.5mm audio-out socket, so plug and go! There's a 24-bit internal DAC making the output strong, loud and great quality through decent headphones - and bluetooth 5 for hooking up wirelessly if you want.

The USB-C port enables QC3 and in my case now, a permanently attached (nod again to 3.5mm audio-out not getting headphone use in the way) Qi Charging Receiver pad, adding wireless charging to the mix for this metal-backed body which is obviously not capable. The battery it charges is not the biggest at 3090mAh, but it punches above its weight and never seems to fail to get me through an average day. Dot some Qi chargers around the place and there's top-up aplenty as you head through your day. Maybe if you're out sight-seeing and shooting lots of photos and video this could be a restriction, but I've been pleasantly surprised by the performance of the battery, especially since Pie came along.

The dual 13MP f2 Zeiss camera/s for my use (and I suspect the vast majority of people's) are just fine. Very good results in most lighting conditions. I do accept that going newer and more modern will get you smarter cameras, AI, clever processing in software, dark/night modes, even now optical zoom, but for most of us, for most of the time, we don't need all that for our family snaps and records of where we might have been. I love the artistic dedicated Mono mode which makes sole use of the secondary lens on the back. There's also OIS in colour shooting, yet another 13MP f2 camera on the front for Selfies and OZO audio recording in 4K Video, which still wows me, 2 years on when I hear it.

When I initially reviewed this phone I declared it very capable, but boring. Maybe that's still so, but all this time later, I think there's a compelling argument to suggest that the Nokia 8 is still a perfectly good work-horse, has many amazingly good attributes, shrugs off many of the newer so-called improvements and changes introduced on more modern phones and holds its head up high. It is high praise indeed that this phone is still in my hand, still keeps up with anything I can throw at it, is bang up to date with software and retains some of the more desirable attributes which have now slipped away from newer phones.

If you have a phone kicking about in a drawer which you forgot about from a year or two ago, why not get it out and think about it again - especially if you're on the brink of shellin' out some wonga on an all-singing, all-dancing expensive shiny new thing! If you happen to have a Nokia 8, don't neglect it! And if you don't have one, think about it before you're too late. At today's prices, new or second hand, it represents amazingly good value. I was maybe wrong to dub it boring. Boring can sometimes represent solid and consistent delivery. One thing's for sure, good quality phones are lasting longer now so keep your cash in the bank!
- July 22, 2019