Media Monkey and Living with 64GB

I have a problem. I'm not only a Digital Hoarder, but also Serial SIM Card Swapper! This works fine for me generally, but a couple of things get in the way. One of them is the two remaining phones I have here with only 64GB Storage (and potential of the Pixel 3a/3aXL) and the other, Google Authenticator. Let me explain.

Firstly, Google Authenticator and recent horror stories about Google account security and SIM-hacking encourages all of us not to make too many changes to, certainly the primary device we're using and which Google sees us using - along with our cellular operator. Better, then, regardless, for people like me to play with various devices of course, but not to make too many changes, particularly with SIM card to flag security events.

However, laying that aside, I have more than 64GB of data that I want to carry with me and a 512GB microSD Card bulging at the seams with films and TV shows (a story for another day as I wait for 1TB microSD Card prices to drop). Here's the equation. Audible Books 11GB, Kindle Books 1GB, Music 35GB, Music Videos 5GB, Audio Comedy 3GB = 55GB. Take into account system/OS space needed by various devices, cache/data held in various other apps, and you can see I'm overspilling.

Why do you have to have all that stuff with you at all times, I hear you ask - well, I live half off-grid with no unlimited broadband and don't want to keep paying (/using up data) my cellular operator to download stuff time and again when I want to watch/listen. Keep your data on a card and plug it in when wanted via USB OTG? Well, that works well for devices which support this, but apps like VLC have to then constantly refresh the content - and apps like Google Photos keep bugging me to sync the folders every time, etc. Cleaner and better to just dump it into internal memory.

So - how to reduce the size of my data. The biggest offender was the music, of course - all of it ripped at 320kbps as .mp3 files. After consulting with Malcolm Bryant of Freepoc and some kindness his end researching/testing, I settled on his suggestion of MediaMonkey to do a job on my Music. There are other tools of course, but this one worked well - and it was like stepping back in time using it as a Windows programme - and the basic version is free. There's a Gold version which enables another bunch of stuff from about £20 upwards. It's a lovely old-fashioned interface of windows, tick-boxes and progress bars!

As most people reading this will know, CD quality produces files somewhere in the region of 160kbps, with arguments for human ear listening of 128kbps. I'm no audiophile so already there was a saving of half to be had! Sure enough, I copied the 35GB of files into a fresh folder, pointed MediaMonkey at it and told it to convert the 320kbps files to 160kbps. As expected, the 35GB suddenly became 16GB - and with some further 'culling' of music I don't even like (and don't know why it's there) I got this down to 11GB. It did take a long time, but you can watch it working! I let it run overnight, so not sure exactly how long the 4000 files took to complete.

I honestly can't tell the difference for casual listening and objective achieved. My 64GB devices now have about 35GB of my data, total, leaving plenty for everything else. Furthermore, I no longer have to move files around when switching between phones which have 128GB and 64GB internal storage, have been able to create more space on my Film/TV microSD for more content and can either plug that in (for devices with no card slot), put it in the tray (or not) depending on projected use. I'm free to use 64GB devices again - and maybe to even consider that Pixel 3a XL!
- July 01, 2019

What a visual delight this film is. Forget the storyline, look at the imagery - beautifully created and executed by director/writer/producer... 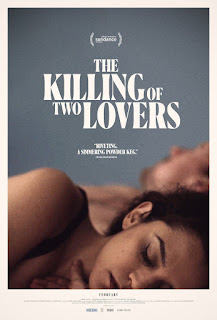