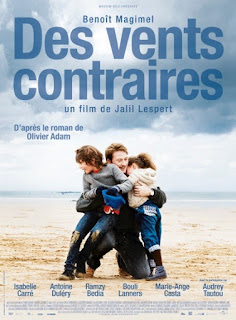 This 2011 mystery drama from France was originally called Des vents contraires and is based on the novel by Olivier Adam of the same name. It's a reflective story starting with a man who is a writer and married to a doctor in Paris as they go about their daily lives. They argue in the opening scene about hectic schedules and neither affording the other enough shared time to look after the two kids, a young girl and boy. The scene ends when she says that she's had enough of all this. They go about their days but the wife doesn't come home that night.

Husband conducts a search but after she's been missing for a year, all-but gives up and decides to make a fresh start in a house by the sea which his family owns but is standing empty, back in the town where he came from. The viewer doesn't see any of that year as we instantly leap forward. His brother offers him a job as a driving instructor and indeed, they start again.

Once again with much European cinema, I have to admit to knowing none of the people involved in this subtitled film except for Audrey Tautou playing the missing wife, who's on-screen time is somewhere between 5-10 minutes. Wonder how much she got paid for that! Benoît Magimel is excellent as the husband, throughout, having to face the task of bringing up the two kids on his own, ably supported by the hugely experienced Antoine Duléry as his brother. The two kids share the limelight though, Hugo Fernandes and Cassiopée Mayance with Magimel as they play off against him convincingly as they're too-young-to-realise the full implications of what's going on but both miss their mum.

During his regrouping, we find out that the police in Paris had hauled him up as a suspect in the missing wife's case during the year which the films skips for the audience, but is ultimately dropped. This doesn't stop him from being suspected of new crimes down by the sea, once the locals find out about his background, however. In his grief, he makes some bad decisions and acts irrationally a number of times, which doesn't help him.

Jalil Lespert directs proceedings at a pace which is just right, though leisurely - this is no action film. It's a well played out drama (which reminded me in some respects of Manchester by the Sea) which keeps the audience guessing almost to the last frame about the truth behind the missing wife, but is more a reflective drama relating to family and people having to adjust and get on with new parameters in life. It's available on Netflix in the UK at time of writing and is certainly recommended for a rainy Sunday afternoon.
- July 07, 2019