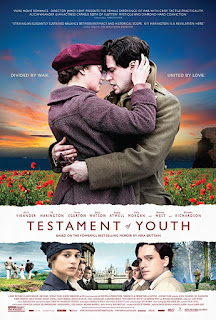 We were talking on Projector Room recently about the forthcoming James Kent project, The Aftermath (2019) and also the acting ability of Alicia Vikander as we considered her role in The Danish Girl. Here, the two intersect as I watched Testament of Youth.

As always, it seems, when a film is created from a 'true story' there's some give and take, opinions about details, authenticity and comparisons with previous stabs at the same project. The full truth of the life of Vera Brittain, the central character in Testament of Youth, is summarised on the Wikipedia Page dedicated to her life and writings. Well worth a read. Reference is made to a 1979 BBC2 4-part television adaptation, which I must now track down, in which Vera is played by Cheryl Campbell.

Coming from a life of privilege at the turn of the 20th century, Vera is born into a family who have made themselves wealthy through industry. They appear to not want for much, though remain principled about waste and retain a value-base in keeping with the day and their acquired social status. Vera is a very smart girl who wants only to be afforded the same opportunities for education as her brother. She has to fight for it as it is expected that she will find a husband and live the same subservient domestic role as did her mother. Eventually she goes off to Oxford, but WWI breaks out just as she does.

The value base of the social class and society of the day dictate that it was a privilege, duty and honour for young men to fight for their country, so off goes the brother and his friends, one of which Vera is in love. At this point the film turns into a bit of an epic, with time passing across the 4 years of WWI, the tragic depiction of the senseless waste of human life in the trenches, the loss to country, family and individuals. In the mix, Vera awaits word about her brother and (by this time) fiance, feeling as though she should be doing something more useful to everyone than burying her nose in books at Oxford.

She heads off to become a volunteer nurse, initially in Britain but then also, in order to get closer to those she loves, in France - in amongst the trenches. What follows then is a depiction of the events which I won't give away in case you want to see it and don't know fine details of the harrowing story. A story of heroics, bravery, chaos, depression but ultimately new life and hope for the future of the world in renewed peacetime for those who remain.

It's beautifully shot, the sets are convincing, the costume is spot-on and production quite excellent all round. Vikander is simply superb in the role of Vera, she plays it with all the right emotions at all the right times - without slinking off into needless Hollywood tear-jerking style. Having said that, the proceedings are dramatic and emotional, depicting the horror of the day and plight of the people living through it. She is surrounded by an ensemble of actors who each play their parts in turn quite excellently, even those with just a scene or two. Look out for lots of Brits in there too, with Colin Morgan (Humans), Taron Egerton (Rocketman), Dominic West (The Wire), Emily Watson (Apple Tree Yard), Kit Harrington (Pompeii), Miranda Richardson (Damage), Anna Chancellor (Ordeal by Innocence) - the list goes on!

After all was done and settled down, Vera Brittain became a writer, poet, journalist and pacifist for much of the rest of the century and published works on which much of the film is based, notably Testament of Youth in 1933 and later, after her death in 1970, her actual diaries, Chronicle of Youth in 1981. Alicia Vikander pulls all the strings together here, preventing it from becoming a soppy love story, and apart from being very attractive, she is clearly an amazing talent who has so very much ahead of her in the decades to come. Highly recommended viewing and reading.
- July 12, 2019