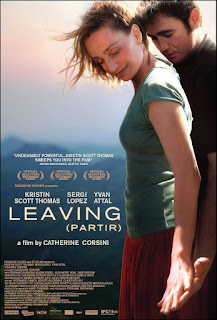 Another French film scooped up on the cheap here which I missed on release back in 2009. From the pen of writer/director Catherine Corsini (Summertime) this one stars Kristen Scott Thomas as a bored housewife looking for something new and exciting, and plays out a bit like Lady Chatterley's Lover.

Suzanne has every privilege in life, married to a small town doctor who is also Mr Popular in the town and has great influence with the officials and other professionals around him. He agrees to build her a physiotherapy clinic so that she can get back to work and do something interesting. Unfortunately for him, she falls hook, line and sinker for the hired hand he employed to do the donkey work!

She realises that she's madly in love with Ivan, played by Sergi López (Dirty Pretty Things) and will stop at nothing to be with him. She demonstrates throughout the unfolding of the story that this is the case and jealous husband by this time is using his influence in the town to ensure that if she's leaving him, she'll be ending up with less than nothing. Yvan Attal (Rush Hour 3, Munich) plays the husband Samuel and the three leads perform very well in their roles. The pick of the three, as you might expect, is Kristen Scott Thomas (Four Weddings, The English Patient) who carries off the English woman settled in France, speaking French with near perfection.

This is beginning to sound at best like a sexy romp or at worst an 'ordinary life' drama, but hold on there! As things develop, all is not quite as it seems (as may be indicated from the opening flash-forward scene) and we do have an injection of 'thriller' as well. As usual with European cinema, there's a laid-back tone to proceedings some of the time, the photography is excellent, making use of lovely French countryside as it hooks up with beautiful music throughout.

It's a tale of passion, revenge, lust, love, determination and dissatisfaction. It's a short film, but is perfectly paced to make the most of the storytelling. Kristen Scott Thomas acting impeccably is worth the viewing alone. Recommended.
- July 14, 2019