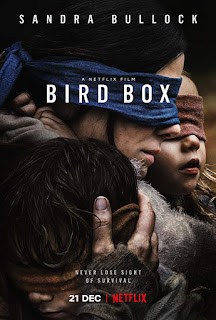 This Netflix production from 2018 based on Josh Malerman's novel is one of these 'throw the cast into a claustrophobic situation as they fight for survival' outings. However, in this case, it's done pretty well and is an enjoyable watch.

There's an eerie wind/presence lurking around (which, spoiler, never gets explained) which grips most of the population into facing their inner fears so much so that they immediately seek an option for suicide. Reminded me of Michael Crichton's Sphere or The Fog in that respect (and probably many more) where a similar unexplained force plays havoc with people's brains. This has been done slightly differently, however, in that people remain immune if they keep their eyes closed (or at least don't look outside, shuttering their homes). Which makes stumbling through towards survival a bit of a challenge. Those who have been nabbed by the power are generally not much harm to anyone else, however, as they just kill themselves - until about halfway through the film, when that seems to change - with some surviving and trying to get those not yet under the influence, to open their eyes. Hope you're keeping up at the back!

Anyway, in the middle of all this we have a pregnant woman who seeks refuge in the chaos in a house with half a dozen people inside. We spend some time with them working out how they are to go and collect food and keep more people from coming in, bearing in mind that none of them really understand the extent of how the whole thing works at this stage and what measures they can or can't take which will or won't turn them into suicide machines!

The film then skips forward and back over a five year period, filling in the gaps and outcomes as it goes. In the present day, our heroine is on a journey with two children, all three blindfolded, in a boat, making their way down-river to a place they think is a safe place to head for, away from all the madness. As the story unfolds, leaping back and forth, there's some suggested violence but not much gore in reality - and I'm not sure where the 'horror' tag comes from - you won't need to be behind the sofa!

What the film does dole out however, is suspense and claustrophobia, which it does quite well. The viewer is often thrown into the unseeing situation that the characters are in, for example, in a car with blacked-out windows, relying only on a satnav to drive to get to food. The camera stays in the car, the whole time. Some of the presentation is edge of the seat at times, some slow, but usually suspenseful.

Sandra Bullock plays the main lead and does so very well indeed. She's convincing throughout and demonstrates how she can actually act, taken away from money-spinning romcomland! She is supported by Trevante Rhodes (Moonlight, The Predator) who doesn't seem to be too committed to the project and there's a bit-part for John Malkovich, which he laps up and as he often does, makes the audience detest his character from the outset! The main demand on the two kids is not dialogue but to demonstrate fear, which they do admirably.

Trent Reznor is responsible for the soundtrack, which is atmospheric and spooky, supporting proceedings, whilst director of the superb 'The Night Manager' Susanne Bier creates the required visual equivalent throughout. There's some interesting camerawork with long shots overhead here and there and creative indoor sequences, designed to further enhance the suspense.

It's a good enough film, pretty well done, based on a bit of a daft premise, but that's sci-fi, I guess! It's an enjoyable two hours which don't pass slowly. Recommended if you fancy the genre - and if you don't, Sandra Bullock doing some acting might be enough.
at December 30, 2018

Clash of the Ultras - Samsung vs Motorola

I have two 'Ultra' phones in hand and they fight for my attention on a daily basis, so I thought I'd pen my thoughts about the p... 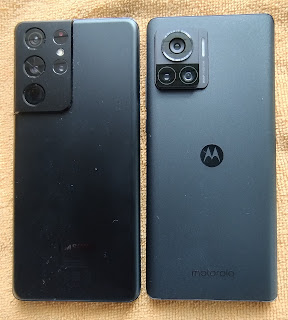