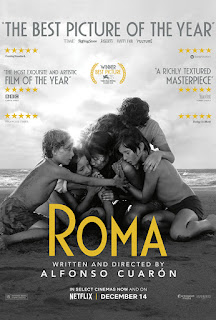 Mexican Oscar winning director, writer, actor, producer Alfonso Cuarón has created this quite amazing film in 2018 to add to his long list of achievements, sadly best known by most for one of the Harry Potter films and Gravity.

Leave behind you the money-making activities of blockbusters for a tad however and focus back down to earth on this excellent arthouse-gobbled delight. As with many artistic creations, the storyline here is a simple one and the appreciation is in the detail and beauty, the style of creation. Set in 1970 Mexico City, we follow the story of a maid who, along with her co-workers, are live-in nanny, chauffeur, cook, cleaner and pamperer of a wealthy family, dad in which is a doctor.

Cleo, or Manita (as those outside of the family know her) is played by the completely unknown Yalitza Aparicio who, like her character here, is plucked from an outback Mexican village, in the film world hoping to make her fortune, in the film, to earn a crust to send home money to support the family. She does a magnificent job portraying the maid, giving her all in each and every scene - and what it demands of her. She's the central character in the film and has by far the most of the camera, though the whole cast are impressive and convincing.

The backdrop to the story is civil unrest in Mexico with political upheaval and student rioting in 1970. This is, however, very much the backdrop and it only encroaches on the proceedings of the story once or twice, to remind us it's there. When it does rear its head, it doesn't bog the viewer down with details they don't need to know.

This is the point at which I don't want to give too much away, but the film gives an interesting insight into how the division of classes works, how a 'maid' becomes very much more than an employee when working long-term and close-up with a family and how the ensemble close ranks looking out for each other in times of need. It's a story of love and loss, loyalty and betrayal, sadness and joy, depression and reality. It touches on so many emotions and draws out great feeling. The last quarter of the film is very moving and emotional, so don't give it up thinking things are too slow!

The direction and atmospheric black and white photography are worth watching this film for alone. Long shots, wide shots, elements placed precisely in ordinary settings to create a picture for anyone's wall of any still. Creative and interesting use of focus and angles - and not being afraid to linger and dwell on scenes to enable the audience to digest images and atmosphere. The opening credits are a work of art alone as a stone floor is being cleaned and the artistic creation involved in a simple act of a man parking a car in a narrow alleyway has been milked and made into a mini-masterpiece of its own!

The settings reflect exacting attention to detail and depict a 'villa' type house in a hot climate with stone and marble floors, clinical, cold but stylish, as you'd expect to see in this era and situation. Incidentally, Roma is a sub-district of Mexico City. The street shots and interiors of public transport are interestingly portrayed and again, reflect tremendous attention to detail. You must be getting the impression that I liked this film by now! And you'd be right. It's a joy to watch and take in, but has to be done twice really, unless you can understand the language, so the second time you can focus a little less on the dialogue from subtitles and enjoy the visual feast.

It really is a masterpiece of film making and it's no wonder that the film has been nominated for a list of awards across the globe as long as the reel of film itself! Highly recommended.
- December 23, 2018

PodHub UK Podcasts for the Month of June 2022

...a roundup of our month of podcasting. Links to the team, communities and podcast homes on the net at the foot, so scroll down! Project... 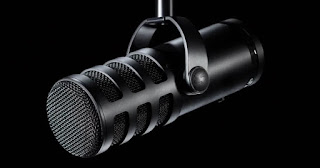