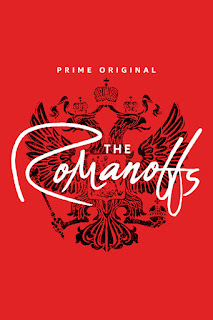 Matthew Weiner, writer of The Sopranos and Mad Men turns his pen and directorial input to this contemporary anthology series set around the globe featuring eight separate stories about people who believe themselves to be descendants of the Russian royal family.

The Violet Hour
A tale of a racist, lonely, bitter old woman who's used to getting what she wants by any means, including the misuse of wealth. Her nephew treads the fine line between keeping her, and his girlfriend, happy. The girlfriend sees what the aunt is doing to him, he sees the broader picture. When the old woman fires the maid and is sent a resilient new one, she turns out to be a muslim student who by hook or by crook is determined to change the aunt. Twists and turns come along and make for a surprising outcome with dark undertones! Aaron Eckhart plays the nephew and the hugely experienced European actress Marthe Keller plays the old bat, but the very pretty home-help was played by the conversely inexperienced French actress Inès Melab - and pretty much grabbed the headlines with an engaging performance.

The Royal We
A couple are finding their ordinary lives a bit, well, ordinary. She's fed up with his lethargy, he wants a peaceful life. He's getting fed up with the hassle, so generates a situation where they need to spend a weekend apart. They both find grass of a different shade of green during their weekends with the most unexpected of dark outcomes. Corey Stoll plays the male lead beautifully and the get-everywhere girl Kerry Bishé, the female. They are both very convincing as are supporting beauty Janet Montgomery alongside Noah Wyle.

House of Special Purpose
This is a bizarre piece of creative writing in which a Hollywood film star and director go head to head in a battle over what is real and what's a part of the set and film that they're creating for TV over in Europe. There are often no logical answers as to what's going on but maybe I'm just too thick to see them! There's again unexpected turns to keep the viewer on their toes. The spoilt brat film star, played by Christina Hendricks came across from Mad Men with the director but the star of this episode is clearly Isabelle Huppert, who steals every scene.

Expectation
This one is the story of a woman who holds a secret to herself which has been eating away at her for 20 years. Over a single day in New York City, a she challenges herself over it whilst awaiting the impending birth of her first granddaughter. Will the truth out, or will she keep it forever? And is she really the only one who knows? Partly because it's set in Manhattan I guess, it feels very much like a Woody Allen outing, but more also because of the style of character building, revelation of inside information and the complex web that human beings weave by imperfect behaviour and the consequences thereof. Amanda Peet plays the leading role in this one beautifully, ably supported by Jon Tenney and John Slattery.

Bright and High Circle
Another strange one, this, whereby an allegation of inappropriate conduct is being confidentially investigated by the police concerning a wealthy family's piano teacher. The family have to look to themselves to challenge their prejudices and consider their responsibilities to their friends, to whom they have recommended the teacher. It's a story about the chaos which can be created for a person and/or those around them, when an allegation is made. The very experienced House of Cards girl Diane Lane takes the lead, performing beautifully as the woman in the centre of the dilemma, whilst the equally weathered Ron Livingston supports as the husband. The piano teacher is played by Girls actor Andrew Rannells.

Panorama
There's odd, and there's odd! This one's not odd because it's strange but because it doesn't seem to fit - in terms of quality of production and acting. Feels like it was shot on a budget lower than the rest and reflects a 1980's style of soap opera. It's a story about a journalist in Mexico who's trying to expose a clinic claiming that their experimental cancer treatment is a miracle cure. He bumps into an American woman who's there having her son treated and tags along with them, getting to know them and showing them his city. And he falls in love with her. In a day or two! And that's about it really. The two leads are unconvincing and wooden, which is surprising for the accomplished actress Radha Mitchell (Melinda and Melinda, Man on Fire) and there's not really a story to speak of. Very dull and the one, so far, which could easily be missed out!

End of the Line
An American couple pay a Russian agency $50K to adopt a baby. When they get there, all is not quite as it seemed and the events which follow have a challenging effect on their outlook and relationship with each other. It's shot in a European style with visual elements adding significance to the setting and story. The two leads are played very well, especially Kathryn Hahn as the mother, facing some (for her) life changing decisions. One would hope that the picture painted of Russia in the bleak snow and prevailing poverty, giving rise to this kind of human marketplace is not true. A return to form here in the series, though.

The One That Holds Everything
The last episode is a sorry tale of a boy who's mother is taken away from him in a dubious situation in which he suspects his father's mistress. The story unfolds showing the crooked development through life and path which he takes, always blighted by this series of events and very difficult relationship he endures with what appears to be his wicked stepmother. Hugh Skinner plays the central role beautifully and the rest of the cast, mainly Brits, support more than capably. The series ends on a high with this dark and sinister outing.

As for the Romanoff family, this really didn't need to be about them at all. The stories stand alone without any of that theme running through. In some of them, it's virtually ignored - one of the characters maybe revealing most insignificantly that they were from the Russian royal line. It really has somewhere between little and no bearing. But laying that aside, it's generally well produced, with some smart writing throughout. It's witty, dark and engaging and although it's quite a lot of viewing time to plough through all 8, some of which are an hour and half long, I felt at the end as though it had been worth it. So, recommended.
at December 09, 2018