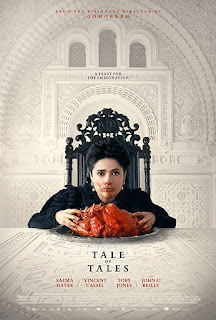 This is a trio of dark fairy tales, loosely connected as the three are based in adjoining kingdoms. The surviving characters come together in the finale in one of the castles. I won't pretend to know the origins of all this, but I can quote that the stories are based on the Pentamerone stories by the Italian Giambattista Basile. It is an Italian production, but the cast speak in English throughout.

The first is a tale of a barren queen, willing to sacrifice everything for a child. It turns sour when a prophet cum wizard sets down a challenging task for her king to execute in order for her to get pregnant. Nothing lewd, just the stuff of magical kingdoms! Salma Hayek plays the queen beautifully, with menace and darkly driven ambition. The next is a tale of another king, so selfish regarding the hand of his daughter and focus on his pet, that things get out of hand with a murderous ogre in the mountains. Toby Jones is delightful as the feckless king. The third is a story about a lustful king, driven to sleep with an old woman who he has only seen from afar, but mistakes her for a beauty. She plays the game and ends up being transformed into a ravishing beauty, then neglects her sister in the process. The sister takes matters into her own hands with gruesome results. Vincent Cassel plays the king excellently.

Things lean towards horror, but never get there, falling short and turning sometimes to terror and tragedy. The proceedings are dark and often gruesome, but never scary. There is also humour littered throughout and I enjoyed some laugh-out-loud moments through my popcorn! The magical kingdoms a beautifully envisaged and created, sumptuous sets and lovely photography. It's often bizarre and mildly disturbing but the running time of over two hours passes quickly.

Directed by Matteo Garrone, responsible for writing, directing and producing many european films, I look forward to his forthcoming live-action take on Pinocchio! It's engaging and fun, through the darkness and I would thoroughly recommend a viewing. Currently doing the rounds on Film 4 in the UK but I think, also on Netflix. Nod to John Campion for the tip.
at December 18, 2018