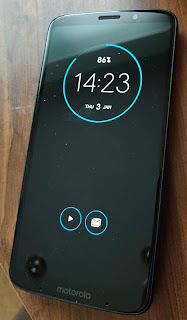 Glance, Always On, AoD, whatever you call it, it's all about what you can see on your phone's screen when it's at rest. I have been finding that over the past couple of years, there is no one device that does it well, with the features that I want - but some come close!

A large part of the usefulness of an AoD is that it's interactive. Notifications (including music/podcast controls) need to pop up and become active from the locked screen itself, not by then having to open up the phone (with whatever security you employ) to dig for the details. There are many phones which have a half-decent AoD display but fall over when interactivity is desired. Security is, of course, an issue at this point, and the best solution to prevent people seeing your messages is to long-hold the item so that a brief headline pops up, then face/iris unlock lets you proceed, where available.

Another part of the usefulness of an AoD is that the clock and icons and text are big enough to actually see 'at a glance' (where Nokia started), not so small that a person needs to find glasses or hold the phone close to the face. It's also nice when there are options to change the size, look and feel of the clock and display.

The other large part of the usefulness of an AoD is that it's always on! Or at least a choice for it to be so. Seems like a no-brainer, but so many devices are not. They need nudging, or tapping, or double-tapping or lifting or waving a hand over to actually see anything. I can't see why devices with big batteries and AMOLED screens, particularly, need to have the screen go off. Or at least have a switch to let the user decide.

Let's consider the options then, and phones that I've (relatively) recently had to hand. Of course, this list is not exhaustive and there are many phones out there which I've not had in-hand, so do chip in with what I'm missing. For those who don't want to read on, the short answer (for me) is that Samsung, LG and Moto Z get closest - but each still with bits missing.

OnePlus 6T is an example of a device which doesn't really tick many of the boxes, but there's no reason why it couldn't be fixed in software. There are a few options for different clocks but no interactivity at all and it doesn't stay on. Needs a lift/nudge/double-tap to then open up and do anything.

Nokia 8 Sirocco does have a true always-on screen, which doesn't seem to hit battery life at all, which intelligently switches off if it's in a pocket or bag, has some layout options, has a nice big clock, bright, making the use of the AMOLED, can be switched off if the user prefers (or times out) but the missing link is the fact that the notification items are often confusing (like a football popping up sometime around the general time that Google Assistant thinks that your preferred team is playing) but more problematically than that, none of the items are in any way interactive. Nokia 7 Plus since the Pie update it's reverted to a dumbed-down version of the Pixel AoD, so small clock, unchangeable, but unlike the Pixel, just doesn't stay on and needs lifting or double-tapping to fire up. As it is for the Nokia 6.1 - same thing.

Pixel devices running Pie puts you in the hands of the automation of the Assistant and doesn't give much control either. The icons are not interactive, so you again have to open up the device to look at items if you miss the summary come through. The display does stay on, so that's great, it shows battery state and Now Playing, but for me, the clock is too small and can't be changed.

Recent Sony devices should vary depending on screen tech, but don't. The LCD XZ2 has excellent clock options and notifications, but they're not interactive and the display doesn't stay on. The AMOLED XZ3 is pretty much the same. As for the OnePlus 6T, there's no excuse for not offering that option to people. Razer Phone (and Razer Phone 2) also has an LCD display, so I guess there's some excuse for not offering AoD. What you do get with a double-tap is a huge clock, however, and large cross-screen notifications as they come in. Sadly, there are no clock options, nor interactivity.

LG G6, G7, V30 and V40 and Samsung Galaxy S8, S8+, S9, S9+ and the Note series raise the bar with lots of options, in the process proving that it can be done on LCD screens (from LG), without nasty hits on battery. Loads of clock options, interactive notifications, music and podcast controls, swipes and scrolls galore - it's hard to fault. There's just one thing for me - the actual size of the display in both cases. Why can't I have a nice big clock, like the Razer and Sirocco, for example, I wonder. All that attention to detail by LG/Samsung but no sizing controls. However, these options, along with the amazing hardware benefits of Samsung devices (particularly) often have my index finger twitching over the Order button!

This leaves, for my little set of devices and experiences, the Moto Z3 Play. This also ticks many boxes. It works differently to others in that it has an ambient sensor which fires up the AoD when something moves across the front of the screen. This works excellently well - the clock is big, the notification icons are interactive and big, there's a battery 'ring' around the clock, day, date and time, though no options for other clocks or anything else in terms of design or style. It's bright and bold and but for one annoying quirk, it would be my winner here - there are no music controls and indeed, when music is playing, the whole AoD and ambient sensor become unresponsive. However, if you lift the phone up, suddenly Music controls (long-press-slide for Next/Play/Pause/Previous) appear! Bizarre - why is the ambient sensor disabled in the process?! Something else that needs fixing in a software update. Fell at the last hurdle, but pretty close!

These are just my group of devices, as I say, and I'm sure you'll have data to add from other ones. My experience certainly point to Samsung here holding the crown with LG and Moto slipped in just behind. Yet another thing that Samsung is just doing right. It's hard to resist sometimes, but my Moto keeps that twitching finger elevated over the mouse and not pressing!

Please do fill in the gaps with your devices and experiences. There is Huawei and Honor out there and Xiaomi now amongst many others. I wonder how they compare.
- January 03, 2019