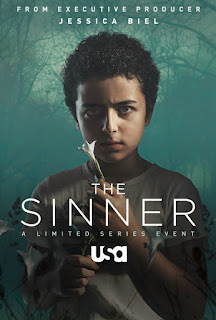 I reviewed Series 1 at https://goo.gl/Lucpzw and concluded that it was a good drama/thriller but it did drag out a bit towards the end. This second series certainly doesn't and is well worth a viewing.

As always, it's helpful to have the context of the first series when watching a sequel, but it's not critical here. The story does stand alone, but with hooks to the previous, not least of which is the central policeman played excellently again by Bill Pullman, as the writers develop his character.

The storyline is one centred around a small boy who is accused of a crime, which he appears to have committed, how the services deal with that, the police investigate and, as you'd expect, nothing is quite as it seems as the story unfolds.

There's a 'commune' involved at the centre of what's happened and a good number of people who have been taken in by its leader, brainwashed and warped by strange ideas, so the theme of religious abuse relevant to the first series is maintained - though this time not so much strictly 'religion' but rather 'cult'.

Jessica Biel played the lead in the first series but seems have become creator and producer of this second outing, not appearing in it herself. The female lead is taken by Carrie Coon, fresh out of Fargo Series 3, in which she was excellent, this time not playing on the side of the law enforcement agency but significant other in the life of the boy. She plays off against Pullman beautifully and the pair would have stolen the limelight but for the child actor playing the accused.

The 14 year old Elisha Henig fulfills that role, though he looks significantly younger, and plays it quite brilliantly. The show is worth watching just for his performance really. He's been well directed of course, but his acting is top notch as he expresses the anxiety, horror and chaos of his situation. The way in which he holds himself, looks to camera, facial control and position are beautifully executed. This TV actor has a cracking career ahead of him for such a young and, relatively, unknown force.

Exclusive to Netflix again, it's out now and well worth watching. It's delivered in 8 x 45 minute chunks and will certainly hold your attention throughout. Recommended.
at December 07, 2018