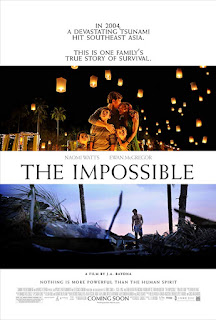 Director of many Spanish films and current latest Jurassic outing J.A. Bayona brings us this 2012 based-on-true story of a British family living in Japan who go on holiday to Thailand just at the wrong time. Two days after they arrive in December 2004, they get caught up in the destruction and chaotic aftermath of the 2004 Indian Ocean tsunami.

This has all the makings of an American-style 'disaster movie' but it's been thankfully resisted at every turn. The special effects are actually very short-lived and there's no leaping from News Helicopter to Disaster HQ, for example - content not gathered up for thrill-seeking audiences to feast upon across the pond. The story has been told intelligently and, for once, I'll forgive a certain amount of hand-held camera work which actually does add impact to the chaotic drama.

The cast play their parts excellently, especially the oldest son Lucas, Tom Holland (who seems to be acting in most productions this year, but significantly over the last couple of years as Spider-Man). Young as he may be in this, he embraces the emotions one might expect in this situation convincingly and with style. Naomi Watts and Ewan McGregor need no introduction of course and execute their roles near perfectly, as you'd expect.

The drama and angst displayed by all involved draws the viewer in sympathetically, making for a moving experience and my only criticism might be that the last third of the film tends towards turning into a tear-jerker. What saves it from becoming Sunday afternoon Channel 5 slush though is firstly, all the above, but most importantly that it's a true story - and presumably, this is what happened. 'Based-on' is always going to give artistic licence to filmmakers, but from what I read, this has been well researched.

The photography presents interestingly as it often depicts the harrowing scenes without dialogue (and often music) of the victims of the incident, often dead, laying around the streets and hospitals whilst also showing the devastated landscape of a holiday resort, usually vibrant and full of happiness. The storytelling style, much like Cast Away with Tom Hanks, keeps the audience away from the outside world and focuses on the people in the location the whole way through. Recommended.
at December 13, 2018