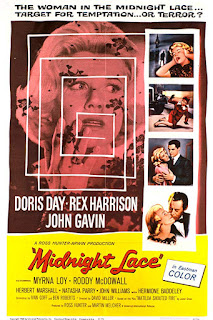 The death of Doris Day prompted me to watch one of her films which I'd not seen before and ended up here with the thriller Midnight Lace. I spent the whole film thinking that had to be a Hitchcock production, but can't find a link!

Doris Day plays Kit, an American living in London with her husband Tony, played by Rex Harrison. He's in business and she tries to fill her time shopping and socialising. Quite early on in the film, she gets the impression that she's being stalked, both physically and via telephone by a man with a 'singing' voice. The viewer sees and hears what she does, but nobody else in the story, apart from her. Is she mentally ill, they all wonder. Is she imagining it, they muse. Or is it clever plotting and careful execution by the fiend.

The film and story unfolds in a very Hitchcockian way, the style, lighting, camerawork, angles and sets could be straight out of Dial M for Murder. And speaking of which, up pops the same actor playing the same near-comic Scotland Yard Inspector role from the very film, John Williams! Twirly-edged moustache and frightfully British demeanour, the same. As if that wasn't enough, along comes the same actor in the villain role, Anthony Dawson - apart from the fact that Day was used in one of Hitchcock's best, The Man Who Knew Too Much!

The cast are all excellent, particularly the two leads who we'd much more readily expect to see in light and fluffy comedies, musicals or romantic outings. Doris Day is, apart from camping it up here and there, very convincing as the woman in distress and Harrison could easily be Professor Higgins! It was funny to see a young clumsy Roddy McDowall in the mix sans ape-mask and an older silent-film beauty Myrna Loy as Kit's aunt. Some of the acting is a bit wooden here and there, but the main players hold it together.

It's probably not hard for a modern and hardened audience to guess what's going on but I would imagine that the cinema-goes of 1960 would have been kept on the edge of their seats, thrilled by the twists and turns and eventual outcome and truth behind the characters involved. It's a great film in which Doris Day acts beautifully and is a pleasure to watch in full swing. She turned her hand well to a serious role and was well directed within it by Lonely are the Brave creator David Miller.

It's great to be able to look back at many of these films still from the 1950's and 1960's which really do have a style and class of their own, so often missing from modern film-making and productions of current day. A tribute to the other side and talent of Doris Day.
- June 02, 2019