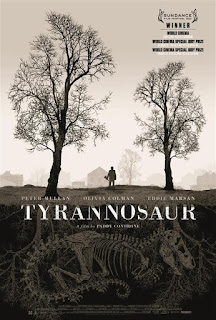 A gripping story of abuse, social divide reflecting the lengths to which humans can be pushed before cracks show, whilst others might just come out the other end, repaired. Actor, writer, director Paddy Considine (The World's End, Peaky Blinders) brings us a 2011 production worthy of Mike Leigh.

Peter Mullan (Ozark, Top of the Lake, The Magdalene Sisters) is Joseph, a Scottish man living in a poverty-stricken dole-driven inner city lower-class estate surrounded by others in much the same situation. He leaps from disaster to crisis on a daily basis in a lager-fuelled violent excuse for an existence, heading for self-destruction.

Drawn by the smile of Hannah, the religious middle-class woman who runs the local charity shop, he starts by deflecting the anger he feels at how the world has treated him and his feelings of worthlessness onto her, as she, hiding behind what she thinks is a shield of religion, soaks it up for a time. Olivia Colman (The Favourite, Broad Church, Fleabag) plays Hannah who, as it turns out, has a bunch of problems of her own behind that shield, much of which lies behind her abuse from husband James, played by Eddie Marsan (The World's End, Still Life, The Professor and the Madman).

What starts out as a sad story about people stuck in settings they'd rather not be a part of turns into a dark thriller with turns unexpected which drive the story away from a reflection of the mundane lives involved. As Hannah and Joseph spend more time together, their stories unfold and we discover more about both of their worlds, present and past.

The two leads, as you would expect, perform impeccably. They are both more than convincing in their roles and draw the viewer into their world, in order to appreciate what it's like and how it might feel to be trapped, powerless, in situations often not of their own making. The makeup and costume adds to the atmosphere and sets reflect that dour urban neglect often present. The cast around the pair bring interesting characters, most of which having a similar set of their own problems brought about by a life of challenge and unfairness. There is a theme amongst all this about social divide and class, but it's not the driving force of the film.

It's an earthy drama about people, poverty and abuse which draws out much emotion in the audience and certainly is not much fun for the characters or viewer. There are points of hope and optimism for those who look for them - within a sea of sadness and misery. A gritty film which you'll be pleased you watched.
- June 19, 2019