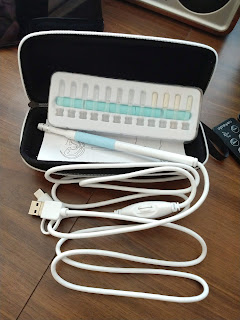 An Otoscope is medical contraption which is used to look into ears, as we know. Usually the quack will whip it out, turn on a light inside, change the nozzle which goes in your ear after it's been washed (hopefully) and inspect the outer ear and surface of the ear drum.

This gadget takes that a step further and sticks a camera into a thin shaft so that the image can be viewed on a computer screen, live as a video feed. Once the software is running, a photo can also be taken or video recorded. Some folk have been able to send recorded footage or photos to medics to save time for everyone when analysing issues.

First thing to say is that I have a good number of phones here - this unit is (allegedly) Android-only, though you can get other models for iPhone I understand - but I can't get any of them to work with it. You download an App and install, then run the software, but it always returns an error and won't hook up. The instructions say that you have to have a phone which supports USB OTG (no problem here) but also UVC (USB Video Class) which I've never heard of, so maybe someone can advise there. Anyway, no worries, as it works fine - and probably more usefully - on my Windows 10 laptop with an .exe file which is downloaded from the Rotek website.

The unit is about 6" long and has a 5.5mm end with the array of LED lights and central lens for the camera. It fits in my ear fine and I can see very clearly my ear drum and the canal. This unit is fixed focus and seems to focus at about 1" distance from the target. It focuses fine with the 720p HD class camera. You can get higher resolution units, but this is fine for inspection. And it doesn't end there of course. You can use this for looking at your teeth, up your nose - or any other bodily orifice you fancy! Or indeed, there might be a good case for using it to inspect blockages in drains or any other round-the-house DIY thing which you can't get to see easily. There's a cord which goes from the end of it to a USB connector which is one of these 3-in-1 units, microUSB, USB-C or USB-A. In-line in the cord is a rotary wheel to control the brightness of the LED lights at the end, which can be very bright.

It comes with a carry-case and some very dodgy-looking 'ear wax removal' tools and sticky-end things, which I think are best left to professionals, frankly. They could very easily be poked into the ear drum creating damage, a trip to A&E and surgery! I'm surprised that they allow those to be included, but then if people are stupid enough they could stick a cocktail stick in their ear and push a hole in an ear drum. So yes, I think this is a great inspection tool, not treatment device!

The software is easy to use on the computer and has loads of different options for recording and snapping photos. The screen is clear and the target can be seen very well. As an inspection tool, I highly recommend this over a manual unit which only one person can see at a time and has no recording potential. But the best, and amazing thing is the price. AmazonUK are selling this for £16! The kind of kit that a few decades ago might have cost huge amounts of money - and were only seen on Mission: Impossible!
- June 18, 2019