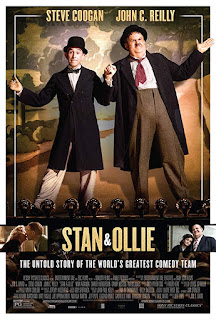 Saturday Morning Pictures was my earliest memory of the appreciation of Laurel and Hardy. In those days of course, it was just the build-up to The Lone Ranger, but appreciate it we did. Their work was an institution and regular doses on TV ensured an ongoing love. Delighted always going forward then was I, to see anything related - and I'd been waiting for quite some time to get my teeth into this film.

The added bonus for me was to see Steve Coogan in a straight role as Stan Laurel. I've always appreciated his work and flexibility - adapting to so many characters in the world of TV and film - and he didn't disappoint. He embraced the role of Laurel, had clearly learnt to ape many of not only his on-stage behaviours and quirks, but also in more private scenes where he didn't drop the similarities for a second. It was an excellent portrayal.

I know this film has been met with criticism and praise in equal measure, but I certainly come down on the latter side. It depicts the later days of the duo's career. We see a snippets of them at work in the 1930's but most of the action is later on, in the 1950's when they were older, not so healthy and on the wind-down to retirement. The action is centred around Britain, during their tour where they were fairly badly managed by money-grabbers around them, in whom they had placed their trust. There is conflict between them as Stan is portrayed as the one chasing the fair deals, not to be done-over with Ollie more passive and more interested in his craft and living for the moment.

It's a sad story in many ways - a side of the pair which is not always well known. It focuses somewhat on that conflict, but also on the passion for their art and ultimate love for - and appreciation for each other. It's also a delightful story of success as they bring such joy and happiness to so many people, evident in some of the scenes when they mix with the British public. The poor management and short memories of many contribute to some of the difficult times in small theatres around the country where they often played to very small audiences, however.

Playing Ollie opposite Coogan was John C Reilly (Tale of Tales, Holmes & Watson, The Lobster) and he too was an excellent choice. His face heavily made up for different ages and sizes of Hardy, you never forgot who he was, as he played Ollie with command and sympathy. Supporting the pair were the wives fulfilled by Shirley Henderson (Tale of Tales, Happy Valley, Okja) and Nina Arianda (Midnight in Paris, Crisis in Six Scenes, Billions), both of whom brought something to the film, the latter offering a very funny performance in some parts which she was clearly enjoying.

The 1950's sets of old Britain are quite superb in every detail. No expense has been spared and the atmosphere can be sipped in, in almost every scene. From telephone boxes to seaside pavilions, from buses, hotels, restaurants and clothes to food. It's beautifully laid out in a delightful backdrop to the story. The photography is executed beautifully with thought and consideration, focus tricks and lighting adding to the overall feel.

I appreciate that some people coming to a story about one of the greatest comedy duo's the film world ever saw were expecting more of a performance, more fun, reenacted sketches and scenes, but this film is not about that. The comic scenes that are shown, are done very well - but this is a story about the other side of the heyday - the reality about what it was like for the pair when the fame and higher profile had gone - as Stan writes new material relentlessly for their stage act. A poignant scene reflects this in which Stan is stood outside a theatre looking at a poster of Abbott and Costello. Their day had come and gone and it was time to move over for someone else to entertain. I thought it was presented, acted, directed, shot and produced near-faultlessly. Highly recommended.
- June 07, 2019