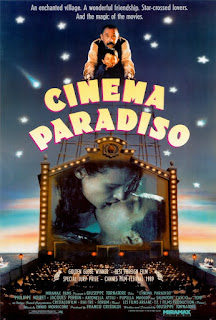 This 1988 Italian Giuseppe Tornatore creation is even more engaging than his excellent Malena and Deception, which has captured the heart of many a European cinema-goer and many more beyond. It seems that there's a cut-down version (which misses out much of the delight) in general circulation for a broader audience who apparently don't have the concentration span to sit through the near three hours.

The much more satisfactory full-length version is the one I'd recommend in order to gorge on the meat rather than nibble on the bones. It's a story of three parts, set in a small town in Sicily during the 1940's and forward. It tells the tale of a young mischievous lad who is fascinated by all things cinema and does everything he can to be involved in the work of the local projectionist of Cinema Paradiso. As the first part of the story unfolds, it's full of rich humour and character-building. The young Toto is played to perfection by Salvatore Cascio (who seems to have, after a few further projects, dropped out of film). He has just the right face, cheekiness and look to pull it off and does so very well - he's very funny and clearly an excellent actor.

The second part of the film is when Toto has grown into a teen, where he is played by Marco Leonardi (who has gone on to other work including parts in Like Water for Chocolate and Once Upon a Time in Mexico). He, too, is well chosen for the task and continues the story through the middle of the film where Toto falls in love, deals with town crises and is whisked off for National Service. The older projectionist is played by Philippe Noiret (Il Postino) throughout and does so with just the right amount humour and seriousness to get the story across. He's a lovable old chap with an outlook on life which later on becomes significant.

The last third of the film is set in the later days, 30 years on, when we catch up with the main characters, find out a bit more about the outcomes of various elements of the tale and are able to pull it all together - as usual, I won't give away any spoilers at this point! Some of the actors need replacing with older people, some don't, but the supporting cast around the two main characters all do very well, though if I'm honest, I really don't know many of them.

The story is a thrill-a-minute for fans of cinema as the audience is offered clips-upon-clips of all sorts of films from the day - the filmmakers have not been frightened to show sections of films throughout as they project for the local community. It's also a sad tale of the decline of cinema at the time and the rise of television. We're treated to an inside view of a small village who's only entertainment in the day was the cinema and it was packed to the roof for every screening. It's also a love story, of sorts, which is moving, touching and tragic. Hankies at the ready, for that part! It's also a story about loss and values, the meaning of life and existence - but with more of a central theme about letting go of the past. This is returned to time and again throughout, demonstrating the strong bond between potential outcomes for those who will let go, those who won't and those who try to embrace both.

It is a long film, but there's so much going on that the time passes quickly. Try and see the full version if you're going to as the themes in the second - and particularly third - parts offer a much richer experience overall. The photography is excellent - a real delight to watch as a piece of art in that respect - and the sets are often beautiful Italian landscape and dusty, dry towns with high-key lighting. I watched it with subtitles, but I'm sure there's a dubbed version for those who prefer. Highly recommended as a piece of not only cinematic history for our time, but also a record of another time and what film and cinema meant to those of a different generation.

Edit: Not sure how I missed out a mention for Ennio Morrocone's soundtrack, which is, like most of his work, beautifully appropriate throughout with a mix of haunting strings, jazz, piano, brass and orchestral delight reflecting the moods, themes and emotion of the storyline and events.
- May 29, 2019