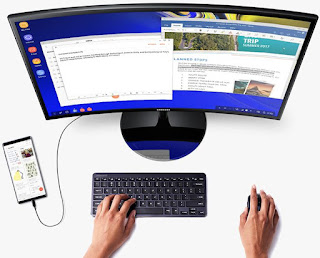 After my recent experience with the Samsung Tab S4 and now Note9, I thought that DeX was worth a closer look. This has been done before, on this and other platforms, by other manufacturers, but using it on these devices has been quite enjoyable, turning a tablet/phone into a more 'desktop' style environment.

At the end of the day, the Tab S4 is still an Android tablet and Note9 an Android phone, but Samsung have gone some way to make it look and feel more business-like, encouraging productivity. With a Samsung Keyboard attached, a (larger than Note9's) S Pen or Mouse in hand, DeX booted, the Tab S4 does feel much better than the dreary Android tablet experience that everyone's been hating for years, pushing them towards iPads.

Movable and resizable windows within which to work, a 'proper' desktop layout, Windows-style task-bars, easy-plugging to bigger monitors or laptops for even fuller control, using a TV to throw what you're doing onto a giant screen, the whole thing feels as though it's been thought out nicely. Yes, there are some glitches with some Apps which won't play ball with the DeX environment, but generally speaking it's a nice experience and for those who need it (or even those like me who don't) it's productive and fun too.

When using the Tab S4, the tablet's screen itself becomes the desktop environment. When using a Note9, it doesn't. So, plug a USB-C to HDMI cable between your Samsung device and Monitor, TV or laptop (with an HDMI-in capable port) and on the phone, you're swept through a wizard, getting you going. DeX chosen, the phone's screen goes blank and what was on it, is now on the monitor/TV and the phone's screen turns into a trackpad (if you choose it to be), like you'd have on your laptop, which you can control with a finger or the S Pen. If you prefer, you can set up a bluetooth keyboard, mouse or whatever and set yourself up a desktop-like environment which is served by the phone doing all the work.

I don't have a 'monitor' here to try this with, but I can report that the phone and Tab S4 hooked up to the TV no problem at all and allowed me control stuff on the telly, via the Samsung. The 'desktop' implications of this are clear for a business environment, as long as all your business can be conducted via Android and the available Apps. For me, that wasn't going to work as there are just, still, some things that you need a 'proper' computer for. One of which is Microsoft Publisher, which the Office Suite refuses to support into Android, claiming that MSWord replaces it. It doesn't! And podcasting, with the requirement for good quality microphones, recording software and Skype at the very least, that just don't make it across.

Anyway, for me this was more about media consumption, though HDMI-out pretty much nails that with Samsung anyway. But still, just to prove the point I continue. Open up (say) Google Play Movies on my TV using the trackpad and mouse pointer on-screen and it opens up in a window. Maximise the window and play your film. All works fine. The phone's screen remains as a trackpad though strangely, the audio still comes from the phone and not the TV. Maybe there's a setting for that which I've not found. Armed with a long HDMI cable, the user can sit in Comfy Chair and watch the content from phone/Tab on TV.

But there's also Screen Mirroring, HDMI-out, which can be switched to at any point in the process, DeX closes down and you then get a WYSIWYG environment, turn the phone to landscape, watch the film (though unlike with DeX, it also continues to run on the phone's screen)! Same result, different tools. (Though strangely, when hooked up using this method, unlike DeX, the sound comes from the TV, not phone!) Which clearly demonstrates that the target market for DeX is certainly not Johnny Hankie sitting in his bedroom! It's a business tool for business people on the road who want to hook up to a handy TV in a hotel bedroom and not have to lug their laptop with them, just pocket in phone, foldable bluetooth keyboard and mouse. And for that purpose, it works beautifully. And for anyone wondering, yes, armed with a Qi pad, the USB-C port being tied up doesn't mean you can't charge. You can, via Qi or a power/split adapter.

Moving back to the Tab S4, all the above remains valid, though in order to get connectivity you'd need a cellular version of the Tab S4 or hook up to the phone anyway. Or hope for Wifi. No, the Tab S4 is really a stand-alone DeX tool, which is why it's bundled with an S Pen and (in some cases) keyboard. You don't need that TV or Monitor, as long as you're happy to be constrained by the size of the screen, use of S Pen - or Bluetooth in a bigger keyboard and mouse. The options are broad and whichever way the person on the move decides to go with this, the end result is Samsung devices hooking up to big screens and the creation of a Windows-like environment within which to work. The downside, as I said earlier, is that you only get Android Apps. Which is where the Microsoft Surface Go (and similar) comes in!
- January 10, 2019