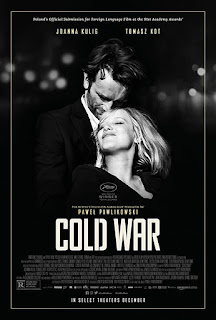 Pawel Pawlikowski's 2018 film Cold War is a tribute in style to his parents, Wiktor and Zula, living in post WWII rural Poland under enforced Stalinism. The story, however, is not. It's a tale overlayed on their characters as he remembers them. A couple who fell madly for each other, became swept up in the entertainment industry, escaped and returned. With the interesting use of timeline here, much has been left to the viewer to work out and create whilst soaking up the expert filmmaking on display.

The story begins with Wiktor (played by Tomasz Kot) and a colleague 'talent spotting' in the poverty-stricken villages of Poland, recording singing voices and assessing dancing ability in 1949. This leads to a 'school' where the youngsters picked to train for the stage are coached, with a view to making the grade to join the planned 'ensemble' on tour.

Zula, played by Joanna Kulig (who also popped up as singer in Pawlikowski's excellent Ida), is one of the hopefuls and Wiktor falls for her at first sight. It turns out that she's knifed her father for 'mistaking her for her mother' and is on the run, pretty much. We then leap on a couple of years and the by-now created traditional folk choral/dance group is touring. At the post-performance party, there's a beautifully shot moment (with a nod to Jeremy Irons and Juliette Binoche in Damage) where the pair's eyes meet a long distance across a room and the camera lingers and 'the moment' when they both 'knew' was defined. And so begins the turbulent relationship which leads the film over another decade or more.

Amidst broken down buildings and crumbling walls, the political party then put pressure on the ensemble to introduce material promoting the ideals of Stalinism with veiled threats, but rewards of tours and expansion if they comply. As they become more famous and embark on the tour, the authorities want to check out Wiktor. When they are in Berlin, he and Zula decide to defect to the West. She changes her mind and misses the rendezvous, he goes, and we leap forward to Paris a couple of years on, where they meet up.

The leaps in timeline are often open and rely on the audience to fill in some of the gaps, Pawlikowski not spoon-feeding details that really don't need time wasting on film. Another leap, and she turns up again in Paris, married to an Italian, but their stop-start affair continues. They make a record together, but she's not happy and takes off, back to Poland. The to-and-fro continues across europe until we end up back in Poland, with much water under the bridge, in 1964.

The story here is, of course, a large part of the take-away, but much more so for me is the technically expert filmmaking, photography, music, sets and atmosphere. Like Ida before it, it's shot in black and white in 4:3 format, which closes in on composition, often leaving activity and action outside of the frame and to the viewer's imagination. Only in european cinema are we able to enjoy such delights of camerawork where directors, not under pressure to make commercially viable films, can explore freedom of experimentation, long-shots, close-focus, shallow depth of field. Lingering shots of people sitting, often turning moving pictures into still-shots and works of visual art. Shooting a scene from another room, as a voyeur, creating atmosphere by use of interesting lighting and shadow, often here near-noir. The music leaps between folk, classical, solo piano, jazz and rock'n'roll. All marking time and place. It's all so refreshing and wonderful to consume. The film is a delight and it's no wonder that it's won, and is up for, awards aplenty.

At its root, the film is a love story. A love story about two people mad for each other. Soul mates, but also, for whom, when they try to settle into a framework of ordinary relationships and living situations, it falls apart. The passion is fired by turbulence and the magic between the two leads has to have that for it to work. Ordinary is not good enough. It's therefore also a story about freedom and tethering, expectations of society and kicking against the pricks. It's also sad in places when we so want it to work for them, but it can't. It's about loss and purpose, fame and values. As with all good filmmaking, you will interpret what you see and hear and decide for yourself what your personal take-away is. Fabulous film and a delight to watch more than once.