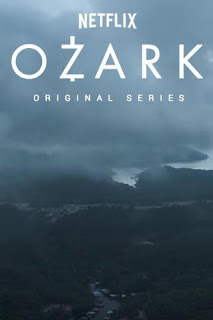 Trying hard to fill the gap left behind by the end of Breaking Bad, it was suggested that I give this dark, violent and grizzly thriller a chance. The American series is now at the end of Series 2, being shown on Netflix in the UK. It’s the story of a family who relocate from Chicago to Missouri in order that dad can easily launder money belonging to a drugs cartel from Mexico, watched over by a ruthless team as he does it. The plot thickens as we go, in good thriller style!

This ordinary family’s dad is Marty Byrde, his wife Wendy and two kids Charlotte and Jonah. The last thing on any of their minds when they headed out from the city was the crime, violence, mayhem, double-dealing and politics as they eventually, like in Breaking Bad, try to keep their heads above water with, the tide rising and odds stacked against them!

In the first series the ground is being set by all the above(!) and Marty finding his feet in his new surroundings whilst slowly but surely the rest of the family start to get an idea of what’s going on too. The characters are being developed as we sweep towards the finale leaving the audience looking for more. In the second series, all of the above is ramped up as events almost spiral out of control and the impact of the criminal activity develops into a masterplan on which Marty has to negotiate with all interested and scary parties!

The cast, almost without exception, warm to their roles, get more and more stuck in as the episodes pass, become more and more convincing and portray the madness they find themselves a part of quite superbly. Jason Bateman (Arrested Development, The Gift) plays Marty and Laura Linney (Kinsey, Lorenzo’s Oil, Dave) his wife, Wendy. The largely unknown Sofia Hublitz and Skylar Gaertner play the two kids, who grow up really quickly in amongst all this, Julia Garner (Sin City, Maniac) plays Ruth Langmore, young head-of-household to a local Hillbilly family as their dad is in jail for a large part of it, Jason Butler Harner (Homeland, The Good Wife, The Taking of Pelham 123) is dogged FBI agent and screwed up homosexual Roy Petty whilst the outrageous Snell family couple are depicted by Peter Mullan (Trainspotting, Braveheart) and Lisa Emery (Jessica Jones, Unfaithful, Wolf). These are the main players who between them turn on a real pressure cooker of a tense thriller which, in book terms, is a real page turner!

The programme is certainly not for kids. It’s an adult themed story with challenging scenes which some might wish to not stomach, but cutting through that, incredibly entertaining and engaging as it is thrilling to watch. The two main leads grow in stature as they turn their characters into monsters who nobody would want to mess with as the drama unfolds. The greed which drives people in this story makes the tension razor sharp in places and the fear of reprisals for stepping out of line keeps everyone on their toes and looking over their shoulder. Including the audience!

The setting is amongst the rural deep south community of the lakelands in USA where people are depicted as often making their own rules, the old way, and resent incomers. The direction (some of which was taken over in part by Bateman in the second series) is taut and photography interesting. It’s certainly worth a look, though you should be aware that the momentum builds as we go. Early on, again, much like Breaking Bad, there’s a lot of scene setting and character building going on, the investment into which pays off well later. Recommended. Looking forward to Series 3.
- October 14, 2018