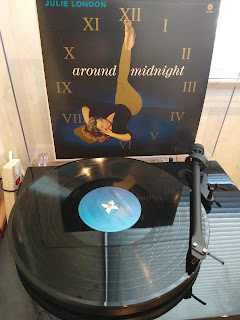 As one of the jazz-based 'whisperer' singers of the 1950's and 60's, Julie London (1926-2000) enjoyed a rich career making music and films. This 180g Black Vinyl LP originally released in 1960, now comes along again and is a blend of songs from her catalogue with a theme of nighttime. It's presented here in a simple sleeve with loads of notes about her and her career on the back.

The sound is amazingly laid back and sultry, softly delivered direct from a smoke-filled jazz club cellar or two! The orchestral arrangements are uplifting and big band depict the era, and before. The backing vocals are perfectly delivered, as is the sympathetic piano and brass support. Love it. Recommended for those who like old fashioned delightful songs, tunes and singing.

Wiki
Her 35-year acting career began in film in 1944, and included roles as the female lead in numerous Westerns, co-starring with Rock Hudson in The Fat Man (1951), with Robert Taylor and John Cassavetes in Saddle the Wind (1958), and opposite Robert Mitchum in The Wonderful Country (1959). In the 1950s and 60's she released a total of 32 albums of pop and jazz with her signature song being "Cry Me a River", which she introduced in 1955. London was noted by critics for her husky, smoky voice and languid vocal style. She released her final studio album in 1969, but achieved continuing success playing the female starring role of Nurse Dixie McCall, in the television series Emergency! (1972–79), in which she appeared opposite her real-life husband, Bobby Troup. The show was produced by her ex-husband, Jack Webb. 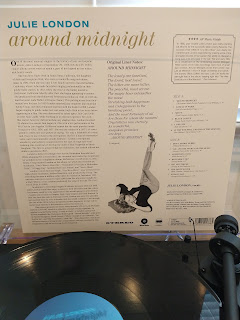