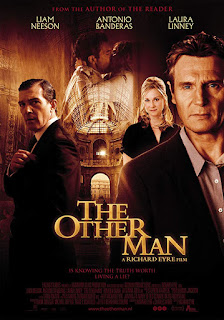 This 2008 film is a smarter-than-average thriller-cum-mystery about a woman who was married to a man very happily for 25 years, then suddenly after a philosophical discussion one evening with her husband, she's gone! Don't switch off though and assign this to a missing-person-chase, as it's much more intelligent than that.

Peter is an Irishman living in Cambridge and married to Lisa, both successful business people. Lisa often visits Milan on business. It's clear that husband and wife love each other dearly and their grown-up daughter Abigail makes up the nuclear family. When Lisa has gone, Peter is distraught and tries to find out more about her life by following clues in her laptop, photos and written notes about her life. He finds out that she had a secret lover in Milan for the last 10 years, Ralph, who she also seemed to love dearly, too. But more significantly, she seems to have purposely left these clues for him to find.

Peter heads off to Milan to try and track down Ralph and kill him! When he gets there, however, he decides to play a game of cat-and-mouse, finding out more about him and his love for his wife by pretending to befriend him. They spend much time exploring that and both their stories come out as they spend long afternoons playing chess and drinking coffee. Over time, his quest to kill the man gives way to an understanding of how it seems that one woman can indeed could have had a deep and meaningful love for two men in her life. There are some twists and turns to come, keep your eyes open for clues as to what's going on as you head towards the last third of the film.

Director Richard Eyre (Notes on a Scandal, The Children Act, Iris) pulls off another interesting film, making the most of the story (which he helped to pen) and actors involved. This 'missing person' thing is common territory for Liam Neeson (The Ballad of Buster Scruggs, Schindler's List, Husbands and Wives), but actually he excels in this one, slightly off the beaten track for him. He plays the main lead with command as you'd expect. Antonio Banderas (The 33, Frida, You Will Meet a Tall Dark Stranger) plays The Other Man and does so with style and class, though he is overshadowed by the other two, especially Laura Linney (Ozark, Kinsey, Lorenzo’s Oil) who steals the show for me. She has less screen time, but what she has, she makes the very most of, is the most convincing of the cast and applies the glue holding things together.

It's a thinking person's missing-person yarn, done very well here, excellently portrayed by all involved, within lovely Italian and English settings. Dark and atmospheric interiors add to the overall feel of the locations and Eyre pulls the whole production together very nicely. Very good film which I recommend.
- August 12, 2019