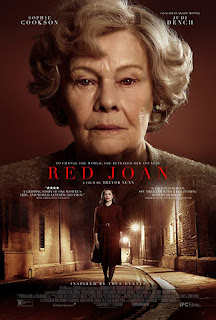 Everyone seems to be up in arms about this story being untruthfully based on the life of Melita Norwood, who worked during WWII under the Official Secrets Act but was giving away nuclear development secrets to the Soviet Union. Actually, author of the Novel of the same name Jennie Rooney was very clear about it being a fictitious account, weaved around, loosely, the person in question.

Having got that out of the way, it's an excellent yarn which starts with the arrest of Joan, in her 80's, in England - and the rest of the film is shot in flashback, depicting the events of the story with occasional returns to the police interview room where she's being grilled. Joan is played as the old woman by Judi Dench (Notes on a Scandal, Miss Peregrine's Home for Peculiar Children). She doesn't have much screen time, but what she has, as you might expect, she injects class.

As we flashback to her early life as an employee of the British development team, her role is taken over by Sophie Cookson (Kingsman) who does a splendidly stiff-upper-lip job portraying a well educated and privileged young lady, out of Cambridge University, back in the era when 'nice' people were frightfully well spoken! She makes for compelling viewing as she pretty much rules the roost throughout. One to watch. Whilst Joan was at Cambridge before WWII, she hooked up with a couple of communists, Leo and Sonya, who were, at the time, trying to stand up against the upcoming fascism infiltrating world politics. She didn't really go along with what they stood for but had fallen for Leo and wanted to please him with her non-resistance. Leo is played by Tom Hughes (Victoria) very convincingly, leaping in and out of Joan's life teasing her with shades of long-term commitment.

Sonya is played by Tereza Srbova (St. Trinian's) reminding me very much of Kristin Scott-Thomas straight out of The English Patient. Again, very confident, tall and in-control female of the day. As her role and actions unfold, we learn much about her behaviour and position in relation to Leo. The story plays out much more as a love-centred one between the main players amidst a backdrop of the aforementioned difficulties. Joan stumbles into 'spy' behaviour based on her unhappiness about having been instrumental in helping to develop bomb technology, when she sees what happens in Hiroshima. She believes that by leaking the details of development, the Soviets will be able to create an equal threat to the world, so all parties will neutralise the risk to more human catastrophe because of fear of counter-attacks of equal measure.

There's a few surprises along the way as the story develops, which has been held together by director Trevor Nunn (Lady Jane) very ably. The photography is interestingly executed taking in the atmospheric sets which depict the time and era perfectly. Those little tearooms, straight out of Dad's Army, dark interiors with low lighting, perfect costumes for the day and outside, vehicles that you would expect to see on roads with people milling amongst buildings also suitably reflective. It's an excellent little film and story, one of those great British films about WWII antics such as The Imitation Game in which you can expect to see some super home-grown talent in all departments. Recommended.
- August 19, 2019