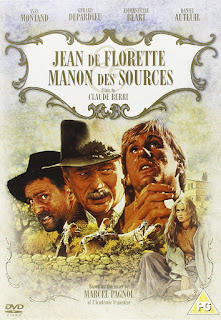 Two films in one from French director, producer and actor Claude Berri (The Two of Us, Hunting and Gathering) and two halves of a story well told by all involved. It's dramatic, tragic, funny and sad in equal measure. It's a story of revenge, but also one of old fashioned goodies vs baddies without necessarily a formulaic evolution into comeuppance!

The two films are set in the same village and surrounding countryside in rural France shortly after WWI and involve the reliance by everyone on water, the supply thereof, coming down from springs and hills supplying various properties. An old man played by Yves Montand (The Wages of Fear, Let's Make Love, Kelly's Heroes) and his not-so-bright nephew, depicted by Daniel Auteuil (Caché, Un Coeur en Hiver, The Widow of Saint-Pierre), are eyeing up a property to exploit in order to set up a money-making business. Just at the wrong time (though partly by their interference), the owner drops dead and leaves it all to his relative, a hunchbacked tax-collector from the city, embodied by Gérard Depardieu (La Vie en Rose, The Man in the Iron Mask, 1492: Conquest of Paradise). The tax-collector decides to make a life in the countryside and breed rabbits, accompanied by his wife and small daughter, Manon!

The two mischievous voyeurs hatch a plan to cut off his water supply without him knowing, destroy his efforts and force him to return to the city. But the hunchback is made of stronger stuff and holds out for much longer than they think he might. When one plan fails, there's another up his sleeve! Eventually there's tragedy and here ends the first half of the story. (It's hard to write a review about a two-parter without giving away plotlines in the second, from the first!)

The second half moves some years later on, when there's no tax-collector or wife around but the daughter has grown into a young lady who makes a living as a goatherd but lives a reclusive life having stayed put after the fist film. She is played by the gorgeous 23-year old (at the time) Emmanuelle Béart (L'Enfer, Un Coeur en Hiver, Mission: Impossible) and certainly in one scene, reveals much of herself! She's not quite sure what went on back in the day, but overhears conversations which confirm to her that the tragedy from the first film was cooked up by the two scoundrels. So she's now out for revenge - and what better way to exact it than to use control of the water supply! Not realising what's going on, the not-so-bright nephew falls in love with her and seeks to marry.

The story then opens up with reveals about the past, twists and turns as we find out more about who's who and what's what. It's delivered gently, there are no outrageous shocks, but there are certainly interesting turns which the viewer needs to keep an eye open for in order to patch things together before they're revealed. There are moral dilemmas throughout but the goodie/baddie question gives way to the tragic elements and whether or not justice will be served, regardless of wrongdoing.

It plays out much like a Greek Tragedy, elements in both films, but don't let that spoil things for you by knowing - there's so much to enjoy here. The first film is generally more comic with the two 'baddies' playing off against each other like a double-act, whereas the second film moves more into a dramatic unfolding of events, a love story, revelation of the truth from the past - from the first film and beyond. There is much bad feeling between most of the characters as events become darker and further removed from the frivolous tone of some of the first film.

The films are a joy to consume, generally. The actors play their parts beautifully and with real conviction dealing with the tragic events which come along. Depardieu plays a big character who puts a cheerful face on everything, not letting his physical appearance get in the way, Auteuil becomes the 'village idiot' with convincing appeal, Montand offers up a huge range of emotional flexibility and Béart, though her lines are few, uses her facial expression and big eyes with great impact. She isn't just here as the sex-symbol and has much to offer as she darts about the hillsides hatching her revenge.

There's loads going on in these two films for the audience to milk and enjoy. It's much more than a simple country tale - there's deep enjoyment to be gained by immersing oneself into the story. The photography is superb and atmosphere created markedly well with the hot baking summers of rural France - where people rely completely on water to farm their land and have to be flexible when it's not there. On the face of it, it might sound a bit of a dull tale, but I would recommend getting stuck into it - you will be rewarded with satisfactory outcomes and rich character depiction. Highly recommended.
- August 12, 2019