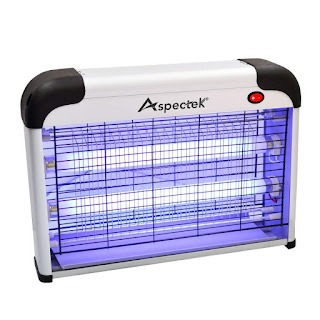 At last, I had a chance to try this thing out with some pesky trespassers this week! My test samples were moths and flies. For some reason, during the two blasts of heatwave we've endured this summer, I was not inundated as I thought I would be. Until now!

Anyway, here it is! It's a 20W UV light wielding unit which you'd typically see on a kitchen wall. It's pretty bright, so you certainly wouldn't want it in a bedroom. In the kitchen then, all other lights off, two flies and a moth roaming around, within 10 minutes it had zapped all three! And blimey! What a noise! Another reason you'd not want it in the bedroom! When an imposter meets its fate, you really hear it - with a loud bang, enough to wake the dead! Well, unless you'd been zapped of course!

Two bulbs emit ultraviolet rays and the grilles (apparently) serve up a 2,800 volt shock! (Doesn't sound very likely, does it!) Dead insects are caught in an easy-remove tray. It comes with a chain if you want to hang it, but I have a place it stands happily on its base. There's obviously a protective grille around the zapping elements. It's about a foot or so wide, 9 inches or so high and about 3 inches fat. Wherever it comes from they supply a UK plug and a cable about 5ft long. Apparently you can get replacement bulbs from the same supplier - so we'll see how long they last!

I'm not convinced that it would be much use in daylight hours or outside, but that's not what I want it for - I'm looking for the last hour before bedtime.

Seems to do the job. Not cheap at £35, but I've had cheaper ones before and they're nowhere near as powerful and effective as this one. Recommended. https://tinyurl.com/yyhn9ao5
- August 13, 2019

This is a very interesting film which I picked up recently on Film4, so doing the rounds. It's a film full of social systems observation... 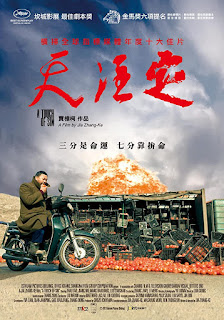