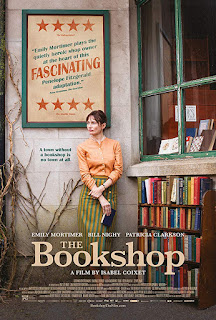 I'm usually alright with slow and tranquil films as there is often something artistic to focus one's attention on, the acting, sets, drama, music or cinematography. To be fair, this has very good doses of all of these, so maybe I was just in the wrong mood! You might think that it's about books and the need for bookshops and love of books. Certainly, a part of this is that, but to some degree, even that aspect is underplayed.

The two main players are Emily Mortimer, noteworthy in a whole load of films and TV including the excellent Hugo - and Bill Nighy, who seems to have had his finger in the pie of most films that get made, everywhere! The two of them act their parts quite excellently, supported by an able cast including Patricia Clarkson (Whatever Works) as the rich local posh family head who tries to put a spanner in the works of our heroine's plans.

It's a very simple tale based on the novel of Penelope Fitzgerald of the same name, which focuses on the relationships between the local people and reaction to an incomer trying to do something interesting and different - and also social conduct and manners - in a kind of Remains of the Day type of way, in which Anthony Hopkins and Emma Thompson performed. It almost feels like a Merchant Ivory production, but even slower!

The sets are well done, the photography is very engaging indeed led by European director Isabel Coixet with not only long-shots of the lovely countryside and seaside town, but also interior sets where the angles and focus have been thought about and worked out well, to create atmosphere and style. The music is supplied by European Coixet collaborator Alfonso de Vilallonga and again, adds to the mood and reflective nature of the film.

It's really a very nice little Sunday afternoon film, in which the viewer needs to focus on the artistic merit rather than the slow pace of what's going on - if you do that, you'll nod off after your roast beef lunch! Certainly worth a look, but it won't blow your socks off!
- March 15, 2019