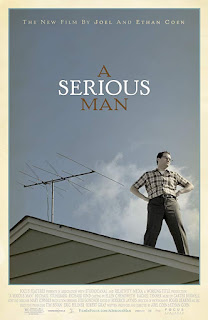 Attempting to work my way back through the Coen Brothers' films, I got to this 2009 one which is in many ways similar to Fargo but centred around Jews living in 1960's America and focuses in on the story of one man at the centre of a chaotic life amongst all the religious tradition (think Martin Freeman or William H Macy from Fargo's film and TV shows).

We have lots of crossover actors too from all sorts of other Coen Brothers' projects (and plenty of Woody Allen's too), which makes it interesting to spot-the-link as we go along! Larry is A Serious Man who's played excellently by Michael Stuhlbarg (who also played Sy from Fargo Year 3 as Ewan McGregor's Emmit Stussy's accountant) and Larry's world is falling down around his ears. His wife is fed up with him, seeking a divorce and looking to set up a new life with her friend Sy (yes, another Sy), played by Fred Melamed who also popped up in Fargo, along with various Allen films. His son hangs out smoking pot most of the time, daughter is only interested in how she looks, stealing money from Larry for a nose-job and preening herself for boys! Then there's the scary next door neighbour (think American Beauty) looking like he'd punch his lights out given half a chance over property boundaries!

Larry is a Professor in the local college who's seeking betterment and that likelihood is looming any minute so he has to hold it together. The son's bar-mitzvah is also coming - and what a scream that is when we get there and the son is high! Larry's loser brother is also living in the house with the family and Larry has to deal with him and his problems on an hourly basis and to add to his troubles, the wife is making him pay for the legal fees associated with the divorce and has forced him and his brother to go and live in a motel! Thrown into the mix is an attempted bribe for higher marks by an Asian student and his father, making Larry feel as though the threat of racist claims gives him no choice but to comply - and the money would be handy! Larry heads for the Rabbi to seek advice (a very funny turn from Simon Helberg, from The Big Bang Theory fame) and get's nothing but philosophy as the world closes further in on him.

What's interesting and different about this film is that there's really not much meat to the story (unlike the Fargo where murder and mayhem surrounded the main character) and nothing much happens - and in that regard, it's much more like an Allen comedy. It's about people, their interactions and one man having to find a path through it all. In some ways it's lethargic, but in every scene there's also rich comedy and laugh out loud moments, tempered with just having to feel really sorry for the long-suffering Larry.

There's deep meaning, no doubt in the film for those who don't want to take it at face value, philosophical and religious commentary about the meaning of life, the struggle for answers to impossible to answer questions, reflected for some on Larry's classroom chalkboard as he poses difficult mathematical formulae for his students to look to solve - along with a bizarre opening and apparently unrelated subtitled scene in which questions are asked about reality, existence and perception. There's much to get your teeth into if you want to delve beneath the surface, but it's also an entertaining tragicomedy which the viewer doesn't really have to know much about Judaism to enjoy.

The film is, as you would expect, beautifully produced and directed with exacting detail from the brothers who can, it seems, make films now just as they want to now instead of pandering to money-making in the industry. And it shows - the amount of time and effort spent on sets and camerawork are an education, regardless of the content of the film, story, script or dark humour.

The cast, as I said earlier, are exceptional, each and every one - and it's great fun spotting people from other films and TV as you go along. I'm enjoying my path through the films of the Coen Brothers very much and the further I travel along it, the more I appreciate that these filmmakers are some of the creative geniuses of our time. Highly recommended - as are most of their films.
- March 31, 2019