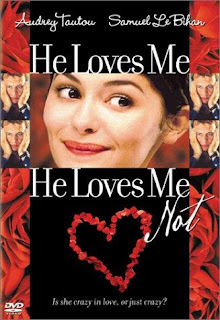 This 2002 drama/thriller is set in Paris and centred around an art student, who is in love with a married doctor. It's one of those films that it's hard to talk about without giving anything away as it has been smartly constructed to support the gentle twists and turns as we go. So much so, that the film has effectively been split into two..!

We follow the student, Angelique, played sumptuously by Audrey Tautou, in the first half of the film and the events surrounding her love for a local heart surgeon. The doctor is played by Samuel Le Bihan who provides a solid supporting role for our star. She tries to get him to leave his wife, who it turns out is pregnant, sets up opportunities for them to be together and situations for him to be away from his wife and plan a future with her instead.

Then, unceremoniously, in the middle of the film, we start again! But this time we follow the doctor instead - through the same timeframe - and get his eye view on the events and how this whole mish-mash is impacting his life, his marriage and his forthcoming child. This is where it gets interesting and turns distinctly dark. Anyone who thought they were in for a twee romcom at this point will realise that it's something different! There are comic moments interweaved, but the main thrust of proceedings are about something quite different. And there, I should belt up!

A relatively unknown actress/director Laetitia Colombani leads us along and pulls the threads of the puzzle together very nicely, revealing just enough at just the right times to keep people on their toes. Think The Sixth Sense and you'll know that you need to keep your eyes and ears open during the first half. The photography is typically european cinema for the time with very interesting angles sought out to make the visuals appealing and the use of long-shots and defocus adding to the atmosphere, to some degree created by itself in the streets of Paris.

So it's probably best if I stop there and encourage you to watch it when you get the chance! It'll keep you entertained for the duration, particularly if you can understand french or don't mind subtitles. Tautou is a cutesy little actress and in 2002 she was performing at her most attractive and best following her cracking performance in Amélie the year before. I think you'll be pleased you gave it a go.
- March 06, 2019

This is a very interesting film which I picked up recently on Film4, so doing the rounds. It's a film full of social systems observation...