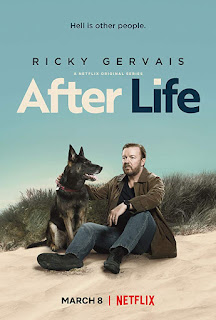 Ricky Gervais projects can be a bit hit and miss for me. I know that I'm (almost) alone not appreciating The Office much and I really didn't get on with Derek, but this six-part comedy/drama hits the nail right on the head and well worth seeking out.

Gervais plays Tony, who's wife has died. Whilst she was in hospital, she made a series of videos for him to watch after she'd gone, as she clearly had cancer - and the time to do it. Lisa, played by Kerry Godliman (Our Girl, Save Me, Mock the Week), was the love of Tony's life and throughout the six episodes as he philosophises about the meaning of life, the universe and the futility of existence, he comes close to ending it all more than once. However, the things that Lisa says on video give him pause for consideration and musing.

Tony works for his brother, who is very liberal with Tony, giving him much more rope than he should have, in the office of a local free paper. He and three key colleagues banter around the office, getting into scrapes and mini-scenes are created by he, and they, going out to interview local people with bizarre stories to tell in order to make a local headline! And some of them are just off the wall. Watch out for the lady who has her own way of making rice pudding and bread - I fell off my chair laughing!

There's a new girl in the office learning the ropes played by Mandeep Dhillon (recently of Zapped, Some Girls and Fried - and developing into a very good actress) who is very funny in her role alongside the eating-for-England slob reporter played by Tony Way (again, of Zapped fame, Game of Thrones, The Girl with the Dragon Tattoo) with whom Tony does most of his out and about reporting. He's also very funny and brings yet another rich character to the team. Across the office is Kath played by Diane Morgan (better known as Philomena Cunk, David Brent: Life on the Road and the excellent Rovers) beautifully observed as the made-up dappy girl who just doesn't get it!

Then we turn to the old folks home where we find Tony's confused dad, played by David Bradley (Game of Thrones, Broadchurch, Harry Potter films) who's lines have been written excellently for Gervais to play from. The nurse attending to dad is Gervais' Extras co-star Ashley Jensen (The Lobster, Catastrophe, Ugly Betty) who very attractively fulfills the role of potential love-interest but concerned bystander observing how Tony is with his dad.

And that's where the meat of the show is - the funny side of Tony not really giving a care for anything, saying what he likes to people, how he likes, doing what he likes, not caring really if he lives or dies. There's much humour to be grabbed from the premise of the miserable lead, in a sad, depressed situation - executed much more reasonably than, say, Victor Meldrew - as there's a reason and substance to why Tony's feeling, acting and behaving like he does.

He bumps into Penelope Wilton, of Ever Decreasing Circles fame, who takes time to sit by the grave of her husband, as does Tony, his wife. As the story develops, she plays a timely role in their short chats on the park bench in trying to enable Tony to see things differently and challenge his values and approach, despite the passing of his soul-mate. This, in a way that his psychiatrist, in flowering comic style, fails to do miserably. Paul Kay (yet again, from Zapped, Game of Thrones, Humans) does this excellently and is clearly having great fun with the medic's role! There's loads of bit-parts and bigger parts played by all sorts of people that you'll no doubt recognise from all sorts of UK TV, if you're a Brit. Roisin Conaty as the 'sex worker' is a scream and Tim Plester plays a sad junkie.

It's a very funny show, which is also touching, sad and bizarre in equal measure throughout. It might well make you roll on the floor laughing or indeed shed a tear. It's been written and directed by Gervais throughout and it's certainly accessible for everyone, I think, unlike some of his work as I mentioned earlier. It's well worth watching and you'll certainly binge it, as, like a good book, it can't be put down. Available on Netflix just now, as it is indeed a Netflix production. Enjoy!
- March 14, 2019