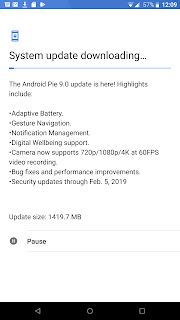 Disappointed as I was to hear the rumours about Razer abandoning their Mobile Division and the cancellation of the Razer 3 along with Project Linda, I was re-encouraged to then read that this may not be quite so. We should have learnt by now not to listen too much to rumours! A statement from Razer suggests, though not too specifically, ongoing commitment after all.

Furthermore, I'd lost heart in the apparent abandonment of the OG Razer Phone in terms of Security Updates and a long-awaited shift to the Android 9 (Pie) software - so much so that I'd stopped using it except as a media server. My flawed logic and feeling was about who'd want to invest their enthusiasm and time in a system that they know is heading down a short cul-de-sac. However, nothing lasts forever - and something which one of the PSC Group members said, made me take stock of that. Whatever phone (or other piece of tech) we buy, it won't now have a long life. Gone are the days when we can buy any tech and expect ongoing support for decades. So, the message I digested was to get on and enjoy using it - the phone with the best speakers on the planet - and stop fretting about the future!

Previous Thoughts
In my original review of the loan Razer Phone OG, I was wow'd by the amazing sound coming from the speakers, six months later I was back with longer term views, having by then bought my own, from then until now I have compared the sound output to many other phones including this Samsung example and finally, I bought and reviewed my own Razer Phone 2 to see if and how that improved on the already fabulous USP. I remained disappointed by the lack of updates from Razer and ultimately returned the unit (as the improvements were significant - but not £700 significant!) amidst rumours, as I said above, of abandonment - as it was an expensive acquisition.

Nice Price
However, it seems that Razer got their finger out, responded to the Razer Community's pressure and pushed out an update, just last month, giving the Razer Phone 2 a delicious slice of Pie. I had previously considered that, as I already had the OG Razer and there's was no sight of Pie in either, the 10-15% improvements in speakers in the second generation wasn't enough to be throwing away more flagship money. The other significant event which swayed my decision was that the new price of the Razer 2 had been dropped from £779 to £499 (thus initially at least fuelling the rumours of a Razer bail-out). Time to think again!

Pie for Chips
As you can see from the screenshot above, as soon as I turned on this SIM Free unit, which arrived with 8.1 and October 2018 Security, it was looking to download Pie and February 2019 Security, followed by a second download attending to Audio fixes and improvements, latest GMS apps and other fixes and improvements, unspecified. Very encouraging! The usual array of Pie changes are listed there along with 4K video recording at 60fps in the Camera app.

Restored Ease
One of the huge benefits of working with Nova Prime, particularly when it's baked-in here (which means there's no need for the side-loading of the Nova Companion app to get Google Feed, or Discovery, or Assistant Cards - or whatever it's called this month) is that a simple BackUp from the old device to Google Drive (for example, though could be anywhere you fancy) and Restore to the new, means that you're up and running as swiftly as, well, a swift!

Greens and Blues
To the changes, then - and there ain't that many really - but I do feel better! There's obviously all the Pie goodness in terms of the Settings being rearranged and more colourful, some stuff shifted from one menu to another, or from sub-menu to menu - and the round big buttons in the Notification drop-down (though this time they're Razer Green/grey instead of iOS Blue/grey) - but we've seen all this many times now. Navigation control on the homescreen is a Pixel Pill and (non-context sensitive, ever-present) Back arrow (which we believe will be going away in Android Q anyway). Interesting that they've done the same thing here as I found in one or two other manufacturers' Pie implementations, differently to Google's Pixel devices.

Controlled Pills
The Pill control also work slightly differently in that with Pixel you have that one up-swipe from it to get to Recents and a staggered up-swipe to get to the Apps Tray, but here, and better I think, it's a swipe-up from the Pill for Recents the same, but rather swipe from the 'dock' area for the Apps Drawer. Works well and there's no finger gymnastics to learn for users. You can also, should you wish, unlike with a Pixel, switch back to Home, Back and Recents buttons. Whichever way you have it, the screen space is taken up with them (except for in media-centric apps like YouTube) so there's no clever OnePlus/Samsung full gesture control available as an option. Call me an old fart, but I think I actually prefer the old way - certainly until everyone catches up with the much better Motorola execution of The Long Pill.

Loving Nanny
Adaptive battery and brightness are present along with Digital Wellbeing, for those who still love their Nanny. There's the aforementioned 60fps 4K video recording for those who might make use of it and the important point here is that all this is straight-from-Google stuff, not tweaked and messed with by phone manufacturers wishing to put their stamp on it and (allegedly) making it better. There's something pure about the way in which Razer works with Nova who works with Google, keeping what's on the phone as clean as a whistle - whilst still enabling terrific customisation options in the launcher's settings.

Chroma
The Chroma thing on the back works just like it did before, enabling control of the lighting of the big Razer LED logo. By far the most sensible option for this is of course using it for incoming notifications but otherwise off. But each to their own! Those who do cane it can, of course now, use Qi Charging for top-ups.

No Voice Games
Strangely, the Dolby Atmos in the Razer Phone 2 (since Pie) has had a couple of main options taken out - Voice and Game. I have no idea what that is about, nor seen it referred to anywhere, but it really doesn't detract from the vast array of options, buttons, bells and whistles available to tweak sound until the users' hearts are content - making the system-wide sound options second to none. One of the most enjoyable things I've found whilst using the system is not blaring rock music out at maximum volume, but rather turning it down and then playing with the rich options available in a quiet room. This is not just about raw volume - there's such of a lot of other ways to enjoy great sound!

Louder and Richer
So there's not much more to report really. I still maintain that the speakers are louder and richer than the OG Razer to the tune of about 15% - and that the Razer Phone 2, armed with Dolby Atmos is the best sounding phone one can buy. I've still yet to hear Asus' ROG phone output, though we did cover that on a PSC show a few weeks ago with Adrian Brain, who was able to at least put that up against the OG Razer Phone. Results of that can be heard in Phones Show Chat 485.

There's no black and white statement from Razer about the future of their Mobile Division. This phone could, very well still be a niche device and Razer might stop supporting it as we go through the 2019 months. And yes, I might well then end up whining about being let down again - but I'll really try not to! Even Android phones with previous generation versions of the OS - and a security version a year old - are still perfectly usable. The challenge might be, should that happen, an acquired adjustment of mindset, owning the risk of that happening right now. The price now, for the amazing hardware on show is very reasonable, and not only for the speakers. I shall hope for support going forward, but revisit these words in the months to come if I'm feeling disheartened!
- March 26, 2019