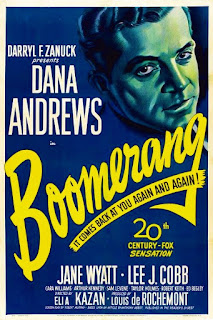 I would never have thought to watch this film from 1947 if it had not been suggested that I do so by my dad. It was one of Great Uncle Ted's favourites and dad tells me that Ted took him as a lad to the cinema in post-WWII Southampton for repeated viewings as Ted loved it so much! So I thought I'd give it a go.

The story is a true one, or based on fact, about a popular priest in Connecticut who is shot in the street one dark night, the failure of the local police to catch anyone for it, the subsequent framing of a drifter who nobody cared much about, the potential political impact on some of the local businessmen and officials in City Hall and the moral standpoint taken by the city's DA in order to see right prevail.

The priest was very popular and when nobody was being apprehended for the crime, the authorities came under much pressure from, particularly, the press who were out to get headlines at any cost. The public were up in arms and demanding, almost to the extent of mob rule and/or violence, that something had to be done. The rising pressure on the man leading the police investigation also had an impact on how he behaved and executed his duties. So a real pressure cooker boiling up and only the DA standing between the accused and a rope.

Now, I'm too young to really know most of these actors, but Dana (isn't that a girl's name?) Andrews takes the lead as the DA and is clearly the most capable and natural actor on display here. He's a handsome chap who I realise now was the heart attack suffering pilot in Airport 75, decades later - and has a list of cinematic triumph aplenty from 1940 onwards! He's married to Madge, played by the very pretty Jane Wyatt in a time when men made sure that women knew what society expected of them (though Madge, in this case, has a surprise of her own too)! A time when women leave the room when men come in to let them do business, which, by inference, would be above their heads. A time when they were expected to serve food and drinks to the assembled men and even put up with overt rudeness. On one occasion a man enters the room where man and wife are sitting, to which the man exclaims delight saying "...I needed some company" and the woman is shuffled out of the way, as if hers was not good enough.

This is an interesting snapshot of post-WWII America though, where everybody, but everybody is smoking (on one occasion next to a petrol pump and even in a court of law) - and boozing half the day too! Every scene seemed to involve breaking out a bottle and glasses - alcohol left right and centre! Also a time when young people were well behaved, well groomed, polite and neatly dressed - and everyone wore black or dark colours, all men dressed the same - and wore hats!

In keeping with this, the film was shot in 4:3 and black and white, in a near noir style with long and deep shadows, uplighting, shallow depth of field, close ups and soft focus. Think Casablanca. Hoards of men swimming around police offices, run by Irish migrators, paint the picture and style of the 1940's sets and style. It was directed by Elia Kazan, famous for various other projects such as A Streetcar Named Desire, East of Eden and On The Waterfront.

The story unfolds in a near-Hitchcockian way as twists to the story come along and turns are presented to the audience without prior exposure. I wouldn't exactly call it a thriller, but the style of delivery is clearly an attempt to make it so and thrill the audience with what material the filmmakers could, given that it was true - and presumably most people would have known the outcome. In that sense, it probably works better decades later for the likes of me, who didn't!

Hang on - I recognise an actor here. It's Karl Malden who plays one of the policemen, though not a lead role. He's the one with the nose! One of those actors that you'll have seen all over the place but probably don't know his name. I remembered him from Beyond the Poseidon Adventure, The Streets of San Francisco and Patton in the end! I expect people older than me will of course connect more with the actors here.

It's an enjoyable watch, which doesn't feel like it's a boring old film in black and white. It's very well made and on the whole, solidly acted. It's paced nicely and there's no room for getting bored or making a cuppa during the proceedings. Films always seem to have a special edge when the viewer knows that the story is true, and this is no exception. It's not so easy to get hold of, but if you see it somewhere being shown one afternoon on one of the film channels, set your recorder. You won't be disappointed.
- March 27, 2019