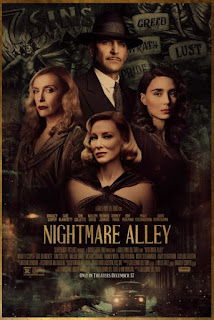 This is a gorgeous film, shot in the dark colour tones favoured by Guillermo del Toro as used in so many other of his films. This one is a story based on a book by William Lindsay Gresham and previously made into a film in 1947 of the same name starring Tyrone Power, which I'm yet to track down. Word is that it's not as full and rich as this one.
I have appreciated previously the work of Guillermo del Toro as I have blogged about The Shape of Water and Cronos, though Pan's Labyrinth and The Devil's Backbone spring to mind too. It's all so stylish and Nightmare Alley doesn't disappoint. I'm looking forward very much to his forthcoming take on the (dark, not fluffy) Pinocchio story.
This story is set in the late 1930's and concerns a 'carny' (travelling entertainment show) in the USA within which various acts are conning the public out of their money in lieu of entertainment and thrills. In the opening scene of the film, we see Stan burning a body in a house, which we come back to later. He appears to be a drifter and then rolls up looking for casual work, which he gets. He starts to learn from the artists and focuses in, as do we, on a 'psychic' sideshow where Zeena and Pete are scamming people. He's good at this and quickly comes up with his own ideas looking to make money himself.
Zeena is played by Toni Collette (Stowaway, I'm Thinking of Ending Things, Unbelievable) and Pete, David Strathairn (Nomadland). I could have seen the late John Hurt playing that role very nicely, but laying that aside, both are excellent. Head of the carnival is a fairly underused Willem Dafoe (Tom & Viv), but he grabs the attention admirably during his short stay.
Stan hooks up with Molly, the electric woman (don't ask), who seems to be in a relationship of sorts with Bruno, the 'strongest man on earth'! Ron Perlman (Cronos) does a great, if limited turn as Bruno, clearly having fun. Molly is played by Rooney Mara (Una, Carol) and does an excellent job, torn between supporting the incoming Stan to help her escape the 'carny' and not being so sure, as she gets more deeply involved with him. Stan is played by Bradley Cooper (A Star is Born, Licorice Pizza) and again, pretty convincing and well cast in the lead.
Anyway, cutting a long story short, Stan and Molly escape the setup and go independent putting on their show, learnt from Zeena and Pete, to the masses at more classy and up-market events and venues. At one of these, Lilith, a psychiatrist played by Cate Blanchett, sees through the scam and challenges Stan with a test in front of a live audience, which he passes. Then they fall for each other but Stan has grander plans to make even more money from her contacts and inside information about her rich patients, one being a seriously wealthy chap who is looking to connect with a dead relative. Blanchett is sumptuous in her role and, as you might expect, steals the show during her scenes with her amazing acting talent.
It's all getting very complicated now - and this film goes on for two and a half hours as the plot unfolds and story meanders back and forth. There's a sense in which it's a film of two halves - one at the carny and one after that, but as we approach the finale, loose ends are tied up and the cyclical nature of the tale puts the threads together nicely with three or four real surprises along the way. Say no more!
The setting is fabulous. Lilith's office is pure Art Deco with style and class. The whole film is shot dark with (presumably) a nod to the original and leanings towards Noir. Deep shadows, wide-brimmed hats, wild makeup colours, all very 1930/40s. The long running time passed quickly though it did feel as though towards the end it was rather hurried to reach outcomes. Even though it was a long film, it could have done with another 20 minutes. Perhaps there'll be a Director's Cut.
Very highly recommended, a great cast, beautifully shot, great sets, super story and some nice twists and turns. What's not to like! Available as I write on Disney+ but also to buy/stream from other outlets.