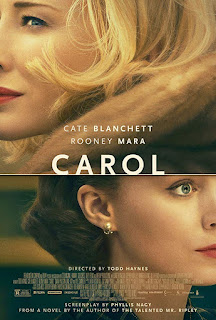 The relatively inexperienced director Todd Haynes takes the helm and draws this 2015 adaptation of Patricia Highsmith's novel The Price of Salt, together very ably. Intelligent use of the camerawork and sumptuous 1950's New York sets and costumes are a delight to consume.

I have spoken before of the adapted novels of Highsmith with my thoughts on Strangers on a Train and The Two Faces of January. There's more to come, but the theme of the repression of homosexuality through the middle decades of the twentieth century are again at the forefront through her writing here.

Carol is a woman in her 40's who is married to a very traditional kind of man who values family and an obedient wife first and foremost. He had previously worked through and affair with her that she had with her childhood female friend and thought that it was over - and that she'd come away from it a wiser and better person. Not the case, as the story here starts with them heading very rapidly towards a divorce and the messy issue of custody of their small girl.

This is the point at which Carol, by chance, bumps into much younger Therese who is working as a sales assistant in a department store. Carol is clearly a wealthy woman and Therese a very ordinary, though well educated working girl. They fall for each other over the course of time, a series of meetings and trips, and although Carol understands what's going on, it's all new to the confused Therese who has various menfolk suitors chasing her to make her their wife. The liaison between them, as it builds, is created with much subtlety and passive warmth rather than with lewd bedroom scenes. The emphasis of the filmmakers is about the blossoming feelings and love between them. Society is not designed to manage such behaviour of course, for the time, and further constructed to actively quash any so-called immorality. What follows is a depiction of how the trappings of society use everything at its disposal to ensure that whatever is going on here is stamped out, by fair means or foul.

Cate Blanchett (Blue Jasmine, Notes on a Scandal) of course is quite excellent as Carol but better still is Rooney Mara (Side Effects, The Girl with the Dragon Tattoo) playing Therese. There's a real chemistry between the pair of them which, if not captured and directed well, could so easily have been missing. The locked-engaged looks into each others eyes across a room, noted before by me as equally commanding in Damage, create a deep atmosphere of their own and drills into the imagination of the audience. Beautifully shot. Kyle Chandler (Manchester by the Sea, Zero Dark Thirty) supports very convincingly as the tempestuous husband Harge, Sarah Paulson (Ratched, Bird Box) as Abby and Jake Lacy, the long-suffering Richard.

It's another great film from the works of Patricia Highsmith. It's a slow-burner in some ways, but is never dull, always engaging and a visual delight. It's a sad love story at times, but more a statement about an era reflecting hope for the decades to come where prejudices are stamped out. It's a study of two people swept up in emotions trying to make sense of their feelings - and that has been portrayed excellently well. Recommended indeed.
at October 02, 2019