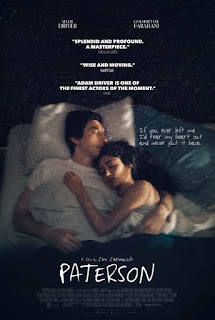 This 2016 film is an observational portrait of one man's ordinary life as he attends to his daytime job as a bus driver in New Jersey - whilst writing poetry in every spare moment he can find. It's a simple tale but utterly delightful in execution as a work of art.
Jim Jarmusch (Broken Flowers) directs this character and dialogue driven slice-of-life which reminded me very much of Paul Auster's Smoke (made into Wayne Wang's film in 2005) or some parts of Steve Buscemi's Trees Lounge in 1996. It's about real people getting on with real life while they still have dreams and passively look for achievement.
Adam Driver (Girls, The Last Duel, Marriage Story) plays the passive poet beautifully well. Mr Nice Guy to everyone and with everyone he meets. He follows his routine - day in, day out and is in almost every scene as we follow in his footsteps. Props around the home point to the fact that he has been an ex-soldier, but he now doesn't get involved with anything controversial unless he can avoid it. Paterson seems to be a town in New Jersey, USA, and our lead character's name is also Paterson. A quirk pointed out once in the film by one of the characters as a nub of amusement, but the edit swiftly moved on.
We follow him in his daily life, driving his bus, and join him dropping-in on ordinary life events between passengers on his bus, sometimes amusing, sometimes sad and sometimes concerning. Ordinary events with ordinary people - like Smoke (above) again. He sits and gazes off into space as words of poetry come to him, before he's prompted to get back to his work. He's also a creature of route and habit, maybe referring to previous military life. (Apparently that photo was actually of Adam Driver when he was in the military.)
We follow him home and join him in his domestic situation with his wife Laura, played as perfectly as Driver by Iranian actor Golshifteh Farahani (Pirates of the Caribbean: Salazar's Revenge, Invasion), who is working hard, day in, day out, on her art in life. She makes clothing, hats, curtains, music, paints, draws and centrally to the story here, cup-cakes! They are short of money but they seem to have found a place in life where they can make ends meet - living a simple life - and who knows, one day her art may be hugely successful and change that for them.
He is as passive with her as he is with everyone else, even the people down at his local bar, where he goes each evening whilst walking the dog for a swift beer. They are clearly madly in love with each other, are amazingly caring towards each other and never a cross-word is said between them. Little challenges that come along they face as a team and deal with together. Every morning as they wake at 6.15, we observe the tenderness they share as they start their day. It's all very cute and cuddly - but it's not sycophantic and sloppy. It's delightful and the viewer gets washed along with the purity of their lives and how they approach them.
The film is centred around the poetry though, which adds to the artistic depth and sentiment of what's going on. The setting reflects urban neglect on the streets and the artefacts of people living in near-poverty, dealing with the risks that brings, in order to just get by. It is beautifully shot though as the cinematography dwells on little things. Small details. Shoes, beer, long-shots with wild focus variation, depth. Pauses, lingering with long-fades ending scenes. It's a great technique and wonderfully artistic.
A lot of the poetry is lost on me, I'm afraid, but much of it reflects the work of William Carlos Williams (1883 - 1963) who is referred to throughout as Paterson sees 'beauty in the ordinary' in life and reflects on it as he writes. He rejects the trappings of technology, computers, mobile phones preferring the simplicity of notepad and pen - two aspects of which bring along mini crisis - and realisation that life could be different with the adoption of such elements which his wife encourages.
Paterson is a lovely Sunday afternoon film. Family-friendly, gentle, very nicely imagined and with pockets of humour - as the audience floats along on the wave of poetry, fine focus and art with this tender couple. It has great depth for those who wish to seek it out or it can be consumed as a light story about a couple in love going about their lives. Either way, there's something for everyone. Highly recommended. I saw it on the Mubi streaming service here in the UK.